How to Treflip on a Skateboard

Tre flips, also referred to as 360 flips, are one of those milestone tricks that signifiy you've progressed beyond the basics. The trick looks flashy and complicated to the untrained eye, but it's relatively simple once you find the right pressure points and figure out the 'scoop.'

Before attempting to learn tre flips, we recommend having consistent shuvits and pop-shuvits because tre flips heavily utilize the back foot scooping motion used in those tricks. It would also be helpful to be comfortable with kickflips and perhaps varial flips because you'll have already done the work of conditioning muscle memory to jump up and commit to landing on the board.

These are the six main steps in learning how to tre flip on your skateboard: 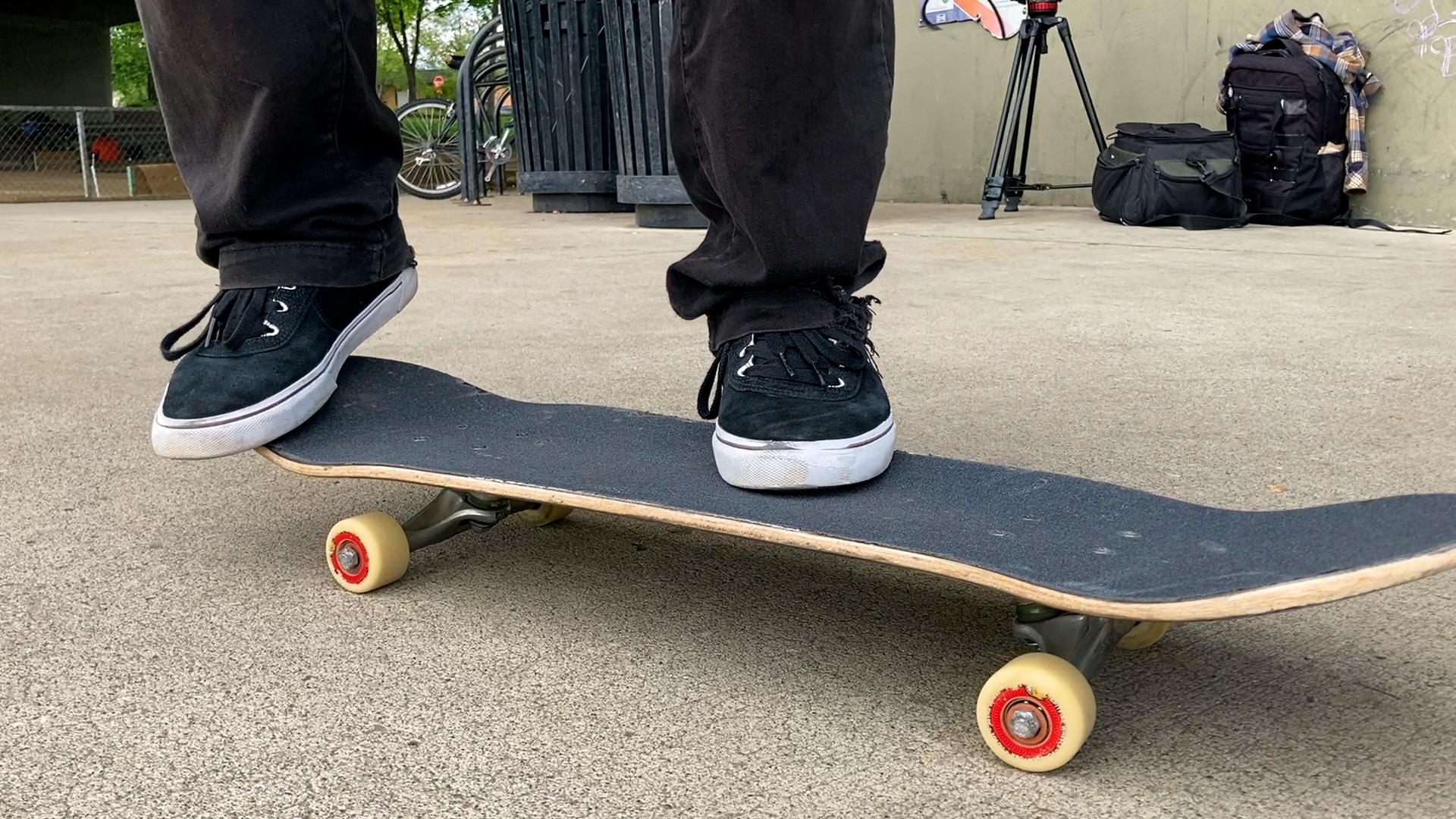 The ball of your back foot should be right on the edge of the tail with your toes slightly hanging off the side of the deck. This placement allows you to get leverage on the side of the tail as you scoop and pop the board. You don't need to have your toes hanging way off. You want the ball of your foot to still be on the tail so you can get a solid jump when you try the trick.

The font foot position is less critical and varies between skaters. The most common position is, somewhere near the center of the board with your toes near the side of the deck and pointed toward the nose.

Keep your weight on the balls of your feet and evenly distributed. Having too much weight on your front foot will make the board lag behind you, and leaning too far back will send the board out in front of you. 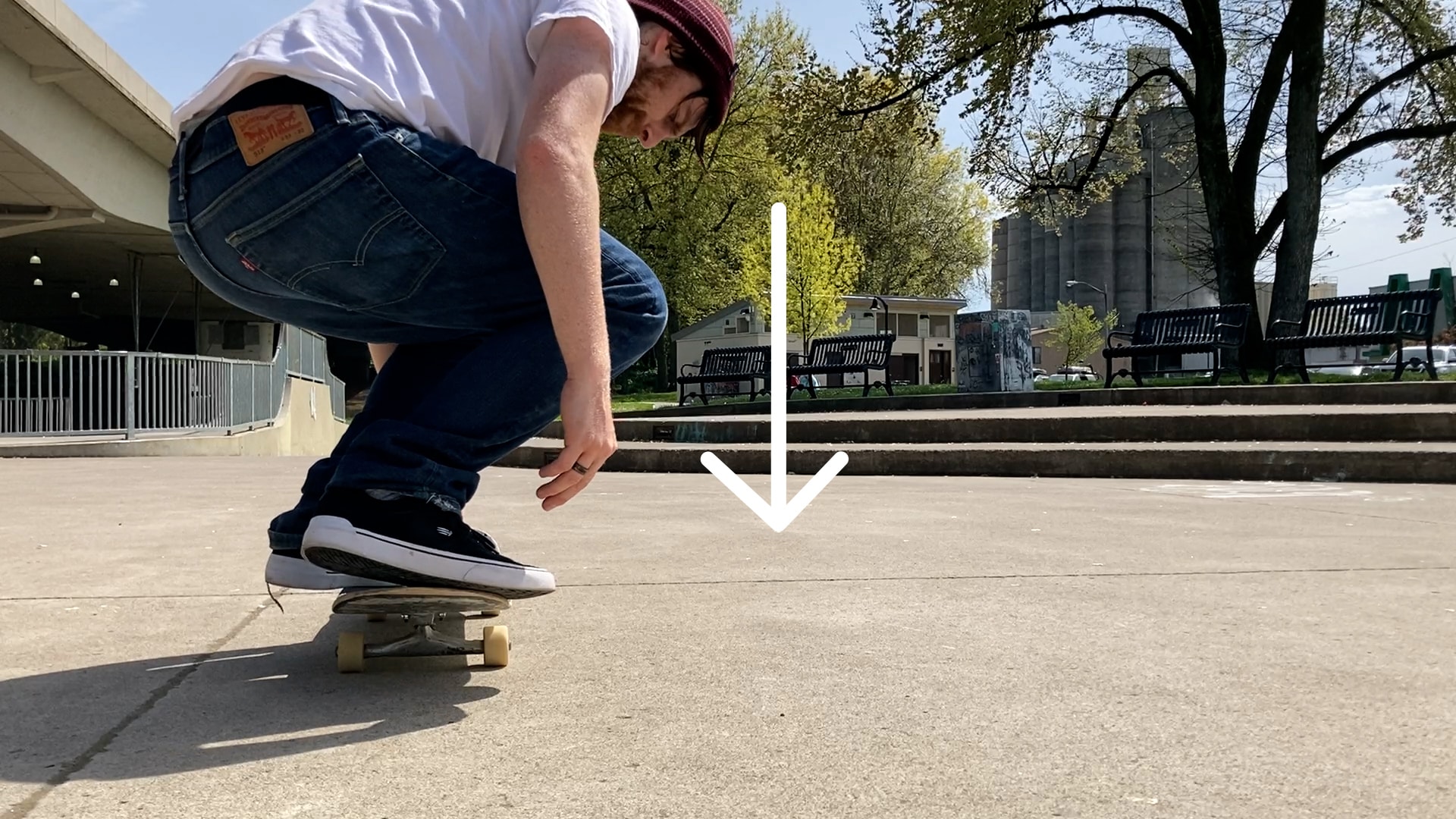 You'll need a solid upwards jump for the tre flip, because you'll need enough airtime for the board to flip all the way. Since tre flips are a scoop-based trick, there is going to be some lateral motion. So when you jump, you'll have to jump laterally with the board to stay above it.

To help with this, just before you start the jump, lean into the toe side of the deck to naturally set yourself up to jump in the direction the board is traveling. 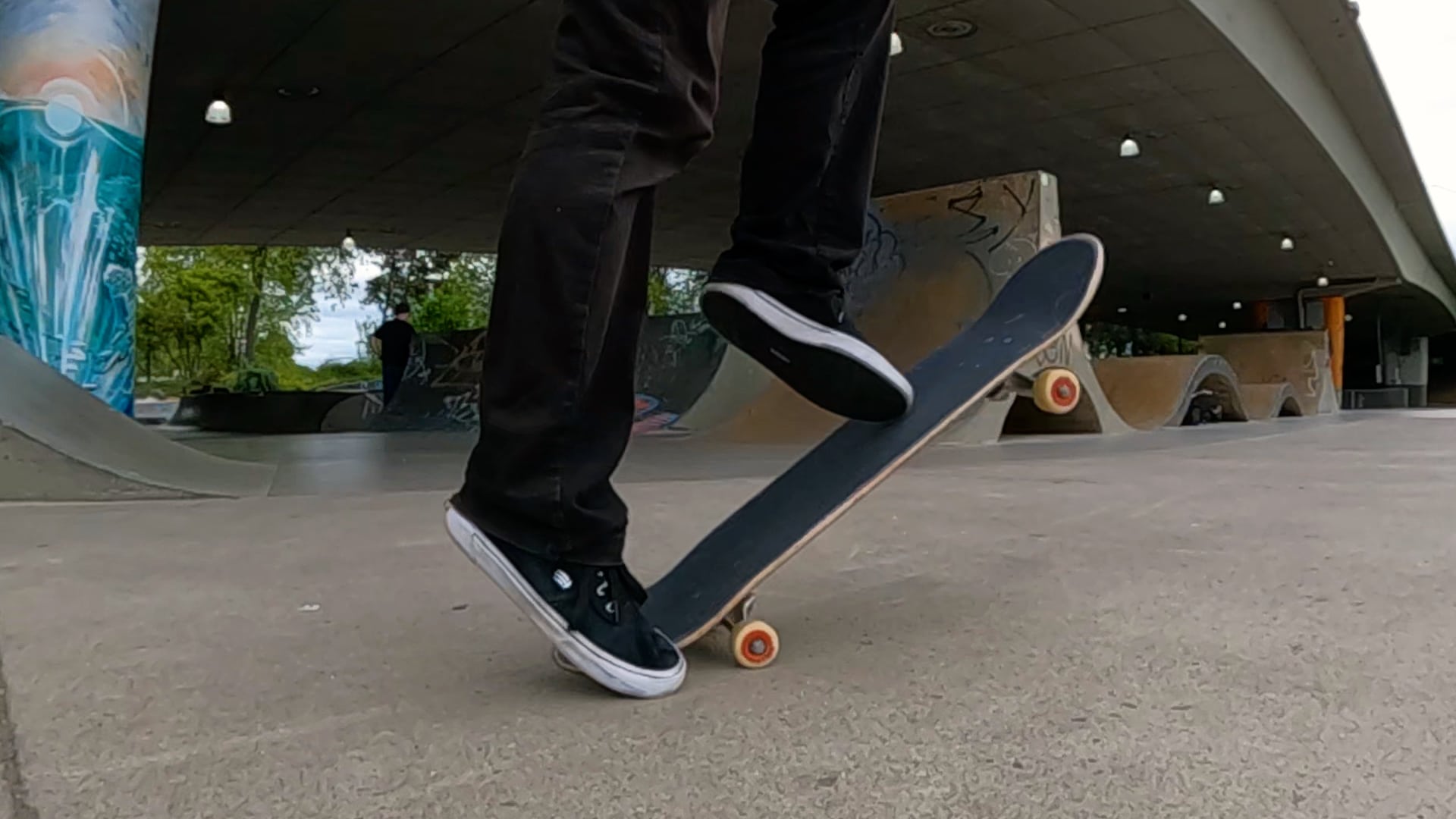 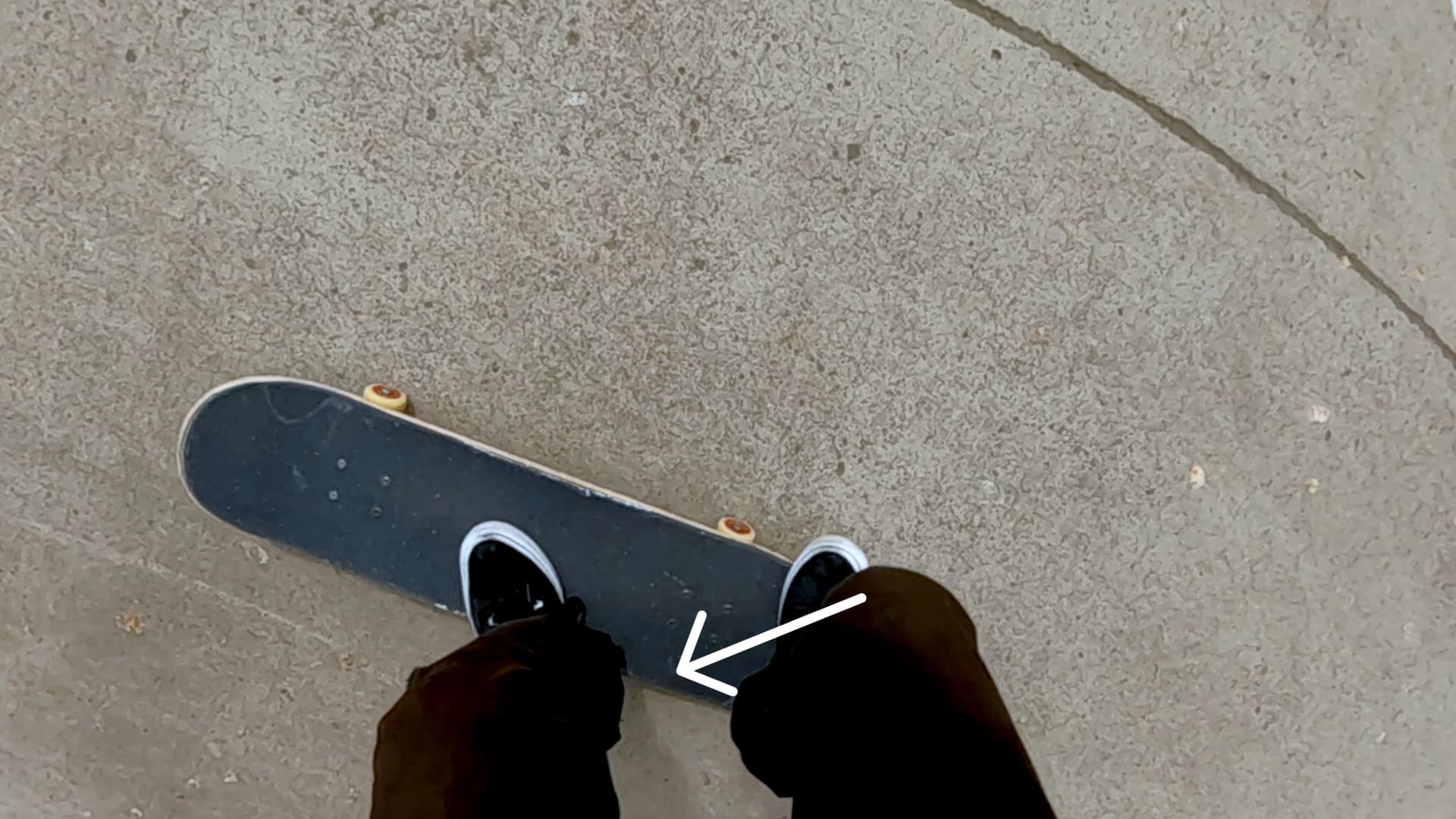 The scoop is the inward curling motion of the back ankle as it torques and shoves the tail to spin the board for the 360 rotation, and it is the most critical part of the tre flip. It's similar to the scoop for a shuvit, but it requires a lot more force and pop.

The scoop occurs just before your feet leave the board from the jump, and the force is directed mostly down and backwards towards your heel. The scoop should also be directed slightly forward towards the nose so the board will keep up with your body instead of lagging behind.

Figuring out the scoop is the hardest part of learning tre flips and will require lots of trial and error to find the right balance of jumping, popping, and shoving the tail to get the right rotation, all while keeping it under your torso.

Make sure your shoulders remain parallel with the board from start to finish with this trick, and resist the temptation of rotating them to compensate for a lack of scoop. If you open up your shoulders and face forward with your torso after the scoop, it is going to be very difficult to commit to landing on the board. It cannot be emphasized enough to keep your shoulders straight through the whole trick. 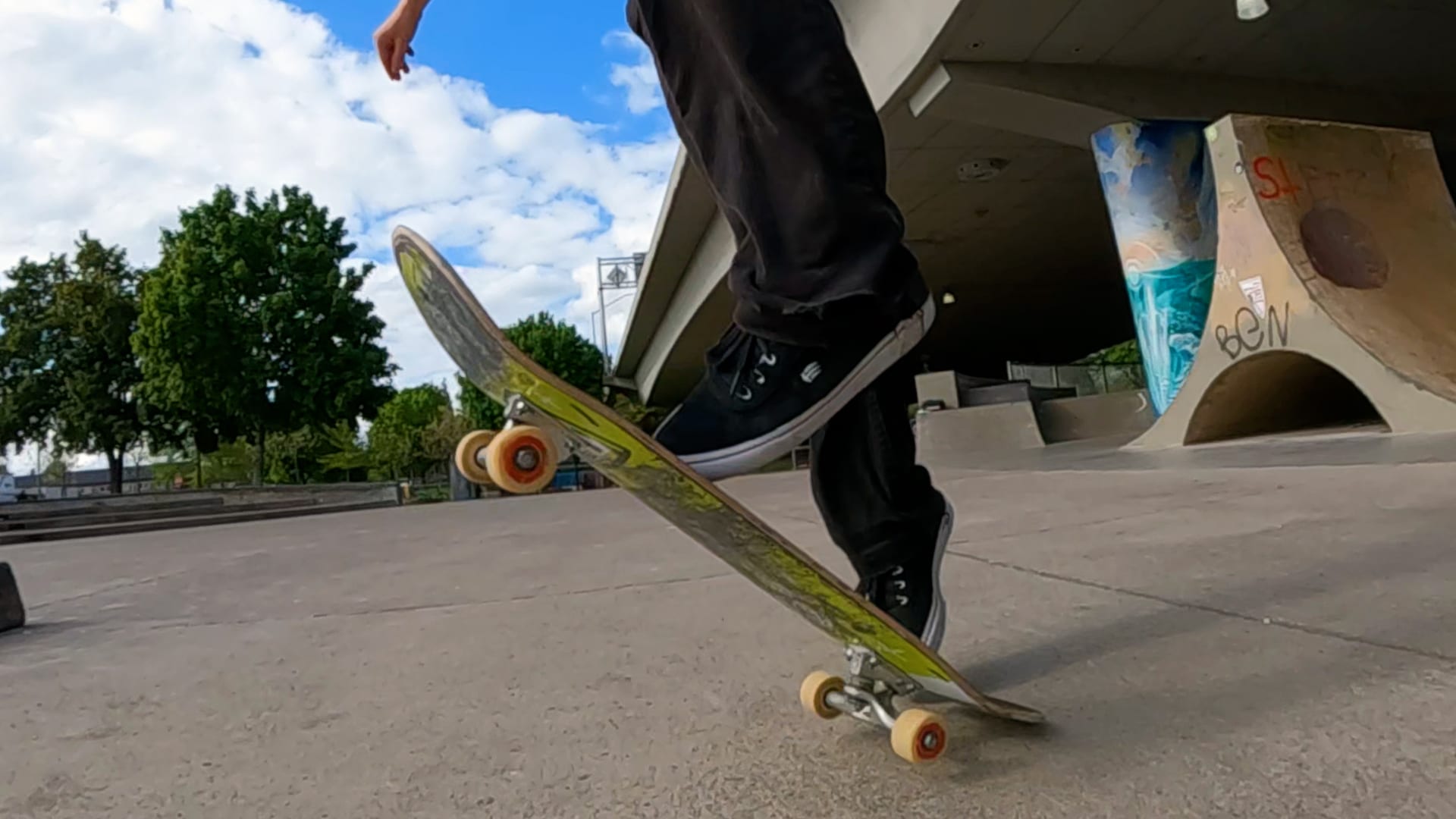 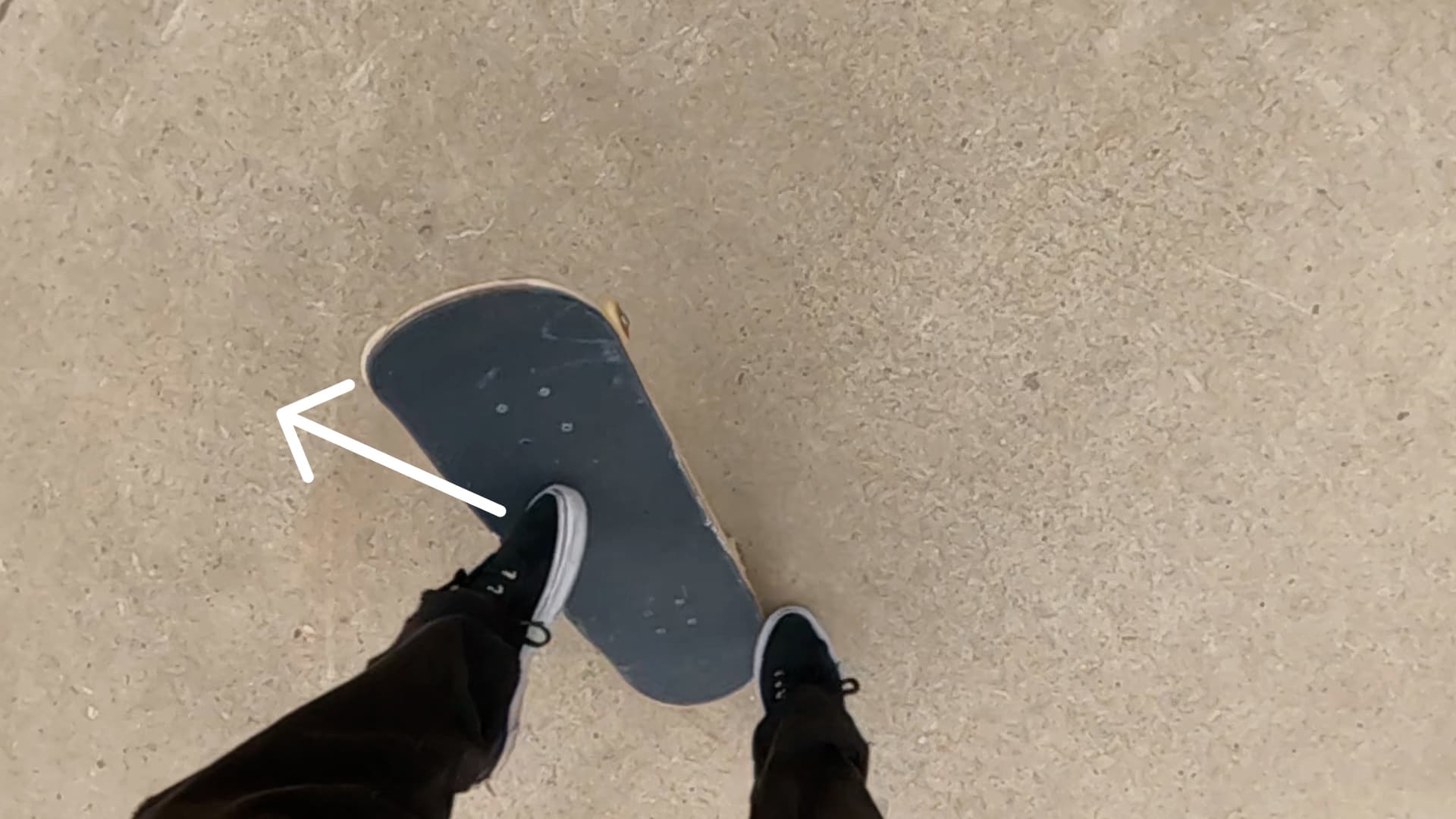 The flicking motion for a tre flip is actually pretty subtle. When the front foot kicks out, the toes just barely grazes the grip. The timing and execution is similar to a kickflip in the way that the foot tilts inward, drags up, and flicks out immediately after the scoop is released. However, the flick doesn't require as much force as a kickflip, and the direction is more upwards and about 20-30 degrees to the toe side of the board. Since the board is already rotating by the time you start the flick, the toe will go off the side of the deck instead of off the nose. 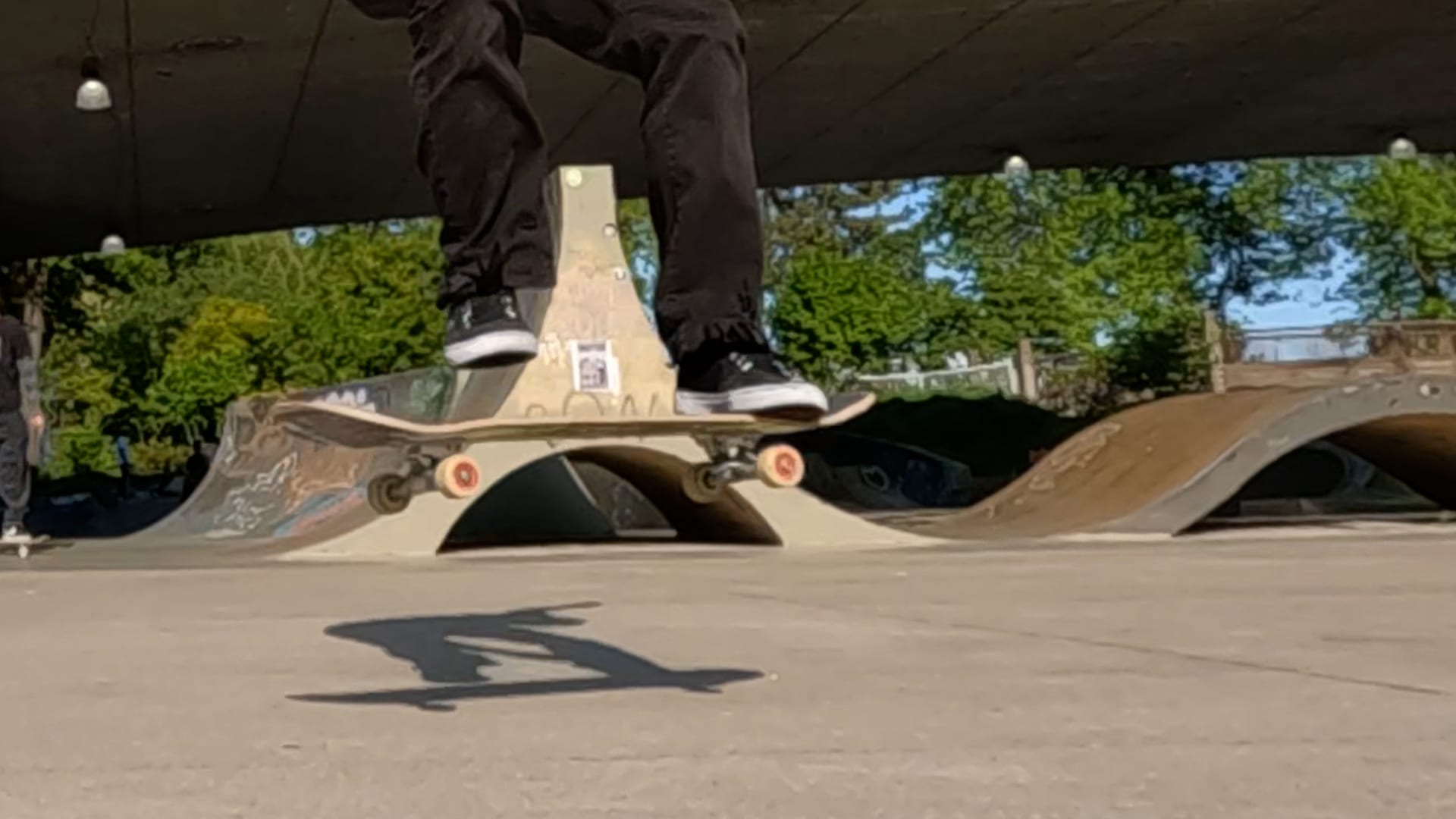 There's a lot going on under your feet when you're trying a tre flip. When you're first learning them, you will probably just meet up with the board on the ground. But when you start learning to pop them up higher or start trying them off obstacles, you'll need to catch the board so it doesn't over-rotate.

The catch generally happens with the front foot because of the way the trick rotates. After the front foot does the flick, it's already in the catching position and is just waiting for the board to wrap around and hit the underside of the foot. But it's completely fine to catch the board with both feet.

Catching the board is gentle and deliberate, not stomping it down. Simply extend your front foot enough to touch the top of the board to halt the rotation, and let gravity take care of the rest. 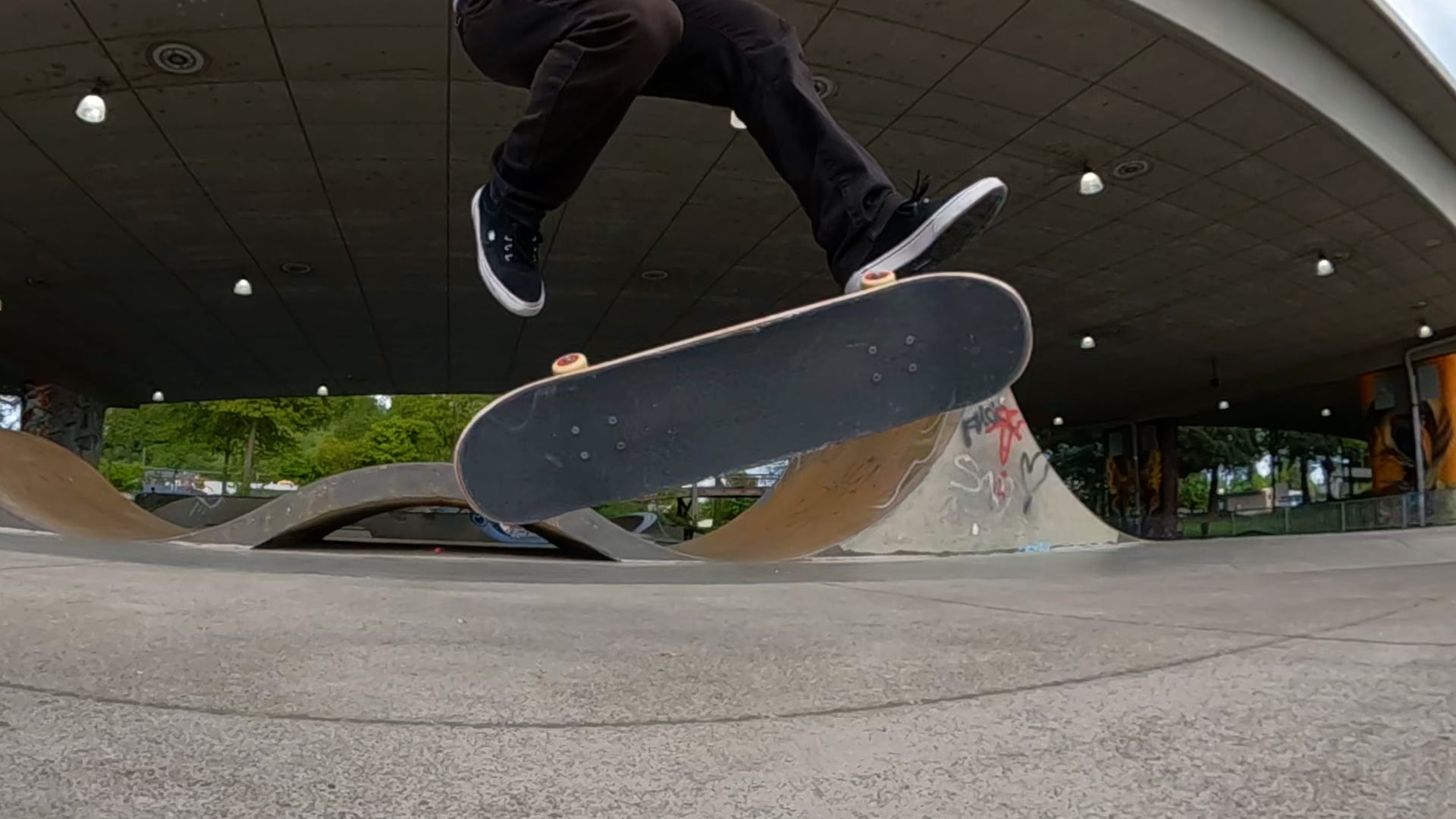 Be sure to practice this trick a lot! Familiarize yourself with how it feels and what it looks like then the board flips properly under you, so you can make that split second decision to commit or not.

Visualize and mentally rehearse landing the trick to give you that boost of confidence. If you can get in that commitment mindset, all you need is one good flip, and you'll land a tre flip.

Here's a few extra tips to help you learn them faster:

Tre flips are much easier on smooth ground because you don't have to scoop it quite so hard to get it to rotate. If the ground where you skate is a bit rough, you can put a little bit of wax on the edge of the tail right on the spot that makes contact with the ground.

If you're scared to try the trick on concrete, you can try it on a softer surface like carpet in case you fall. However it is more difficult to roll or get a solid pop on carpet. And lastly, if you get frustrated trying to learn this trick, just remember skateboarding is all about fun. So take a break, goof off for a little bit and come back to it when you're ready with that fresh determination. Good luck learning tre flips!

We hope you found this tutorial useful. If you have any questions on how to tre flip, let us know and we will do our best to help you out.