The inaugural, soon-to-be annual Northwest open was held on August 26-28, 2022 at Seek Skateboard Camp. People from all over descended on the concrete jungle on a mission to destroy and take home some of the $10k prize purse. If you haven't clicked play to witness the mayhem in the video below, we suggest you do that. It's okay; we will wait...

Welcome back! Now that you are up speed, we have another treat and one more set of instructions for you. We have included a photo recap below with a mix of photos courtesy of Transworld Skateboarding staff photographer Blair Alley. Now, scroll down and feast your eyes on some of our favorite moments of the first annual Northwest Open. 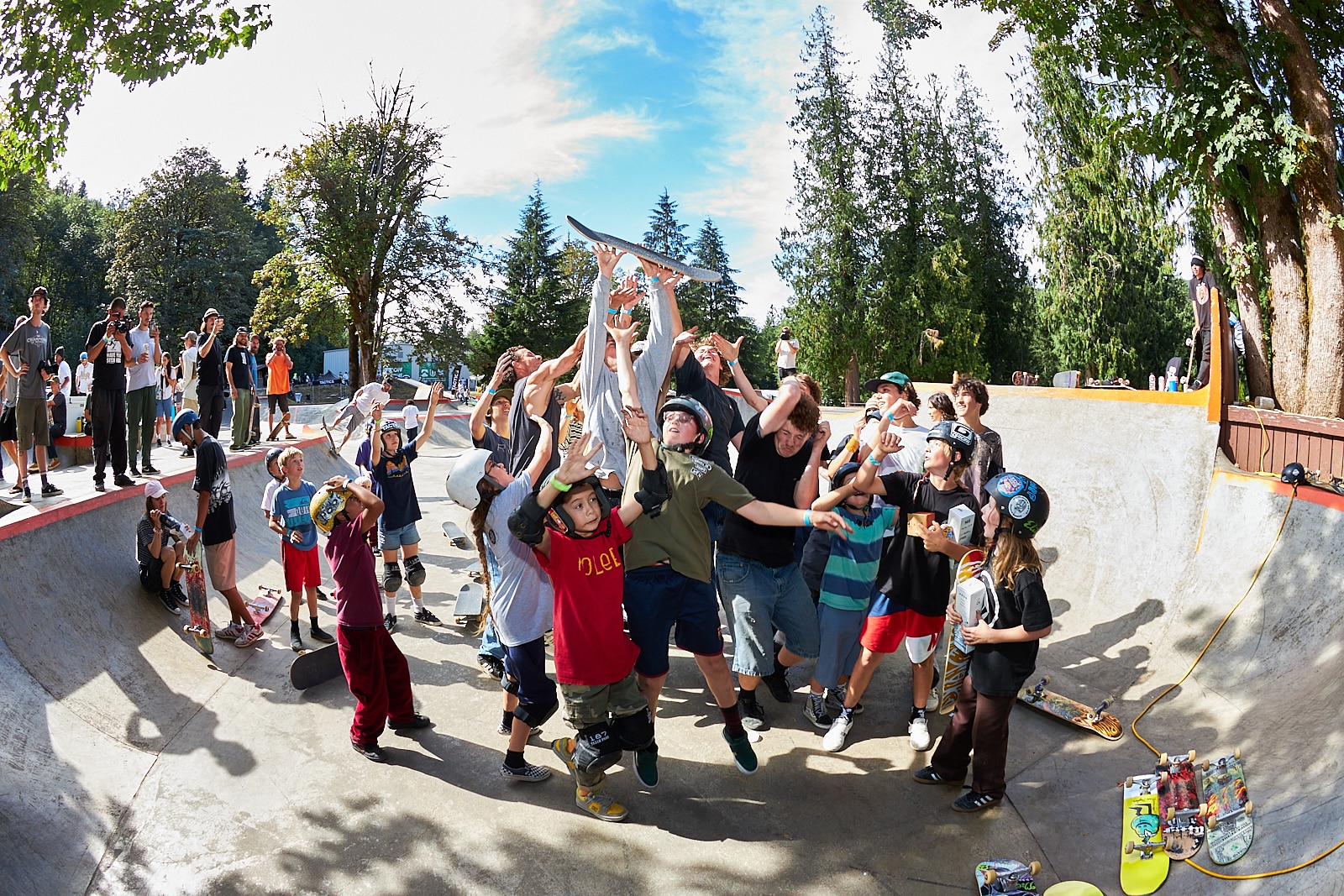 Everyone from groms, moms, pros, and local legends descended on the concrete jungle to get their piece of the $10k. After about an hour of attendees getting a lay of the land and their legs warmed up, it was time to kick off the weekend's first jam session - The Poler Stuff Tent Jam. The beginning of this session quickly answered any doubts that The Northwest Open would pop off. Skaters began flying over, around, into the tent and each other. Our judges threw out money to those who put something down, and the crowd did what a crowd does, screamed.

By the end of the jam, the overall winners were clear. Kevin Kowalski and Jake Selover took home $250 each. The only issue was we couldn't find Kevin. After a brief search of the perimeter, we found Kevin ordering pizza, notified him that he had won $250, and received this response… "Oh, no way?! Sweet, I'm going to get some pizza first."

This man has his priorities straight - Pizza > prize money. 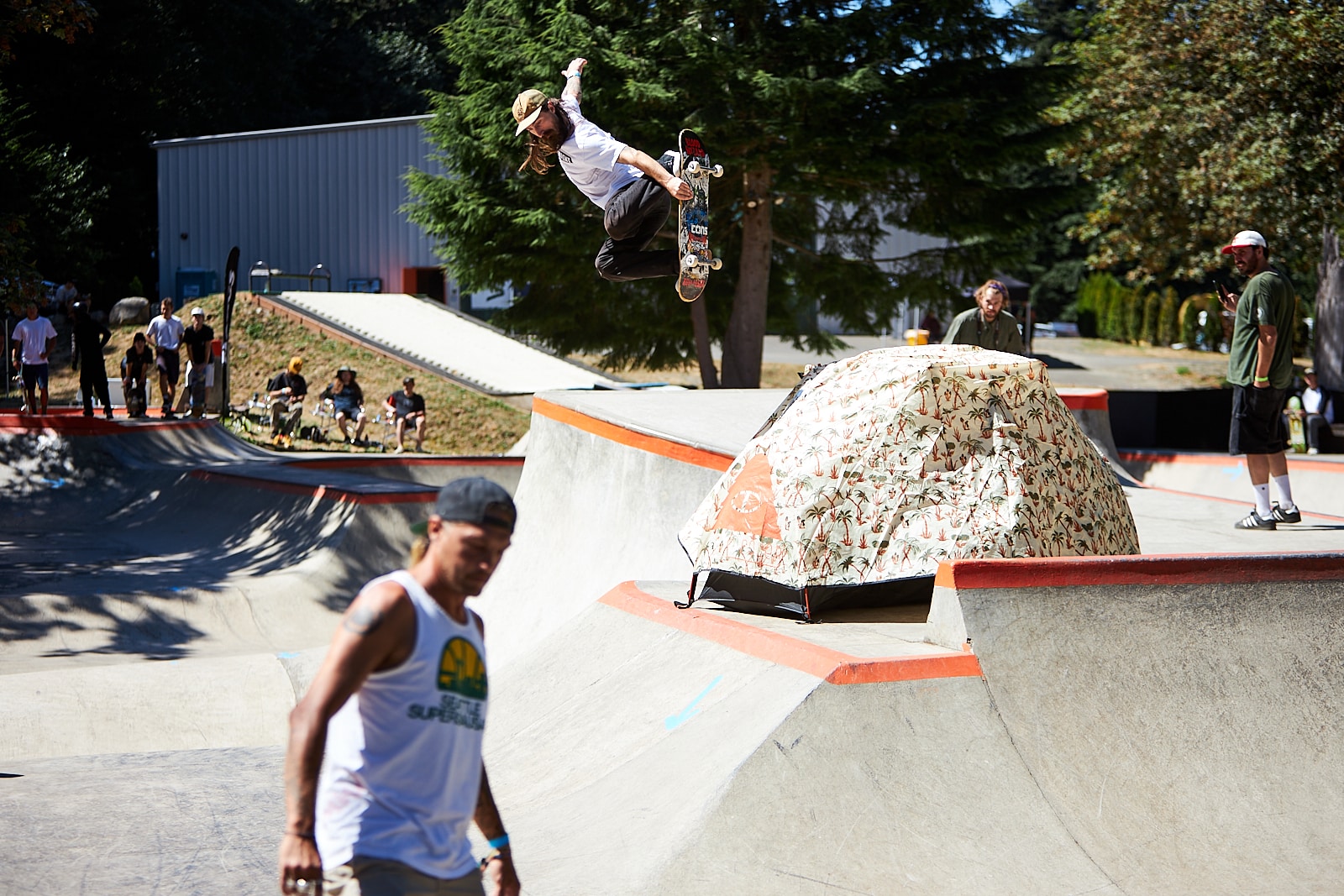 The events on day 1 continued to roll on in rapid succession, as did the action. The Brixton jam didn't disappoint when it came to heavy slams. Of course, people landed tricks, but the slams were something else. When it came to putting tricks down, a stand out was Tactics snow team rider Phil Hansen; he took home $250 for it too. 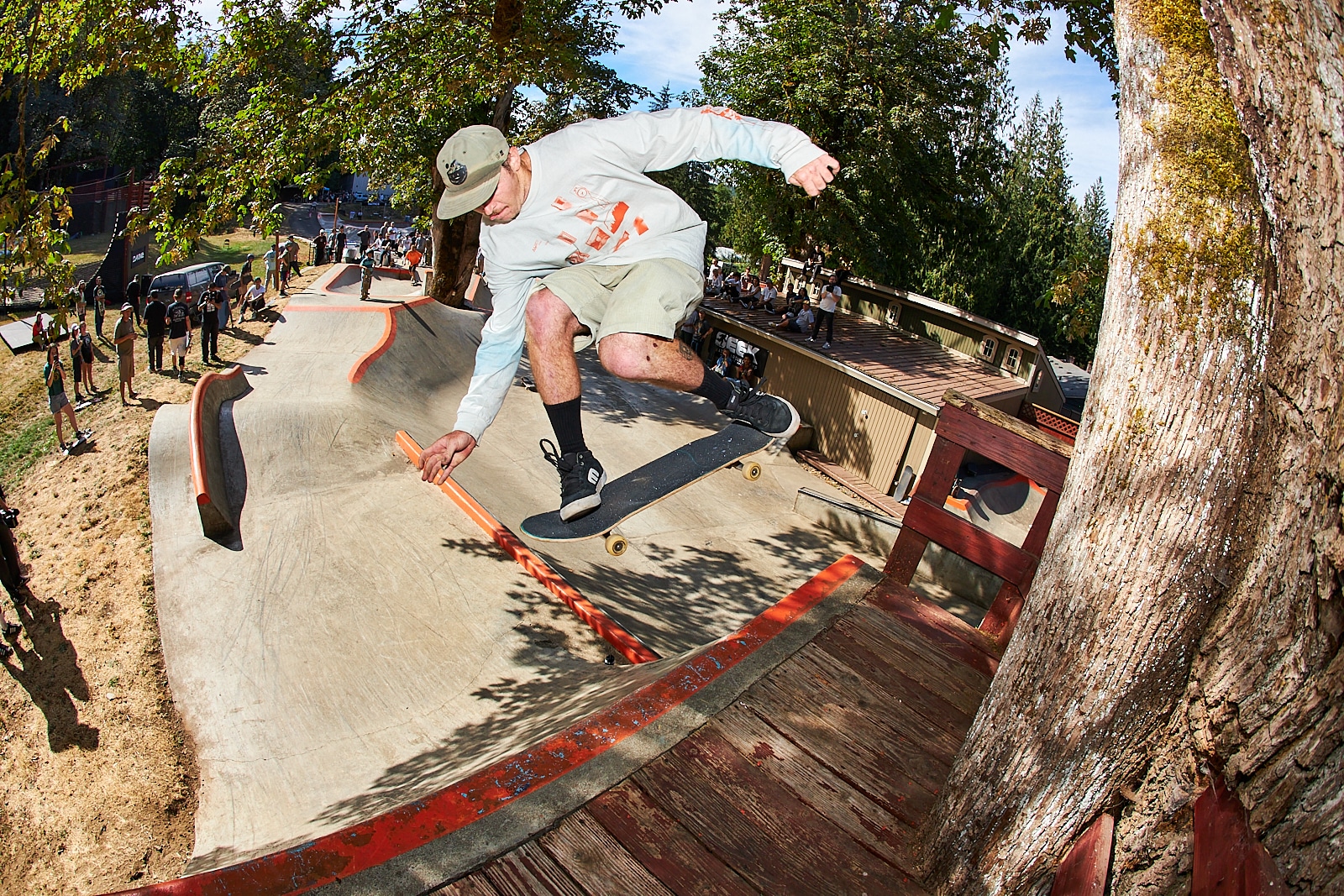 Phil Hansen focused on the prize

In the 5 o'clock hour, the RVCA "pole-jam jam" commenced. While spectators dove into their happy hour beers, Nathan Vitale made the impossible possible, Faith Bakin put on a kickflip and style clinic, and Maya Volpacchio shined as she took home $250. Maybe we are biased in our reporting here; the Tactics crew was holding it down on day 1. But did we expect anything less? 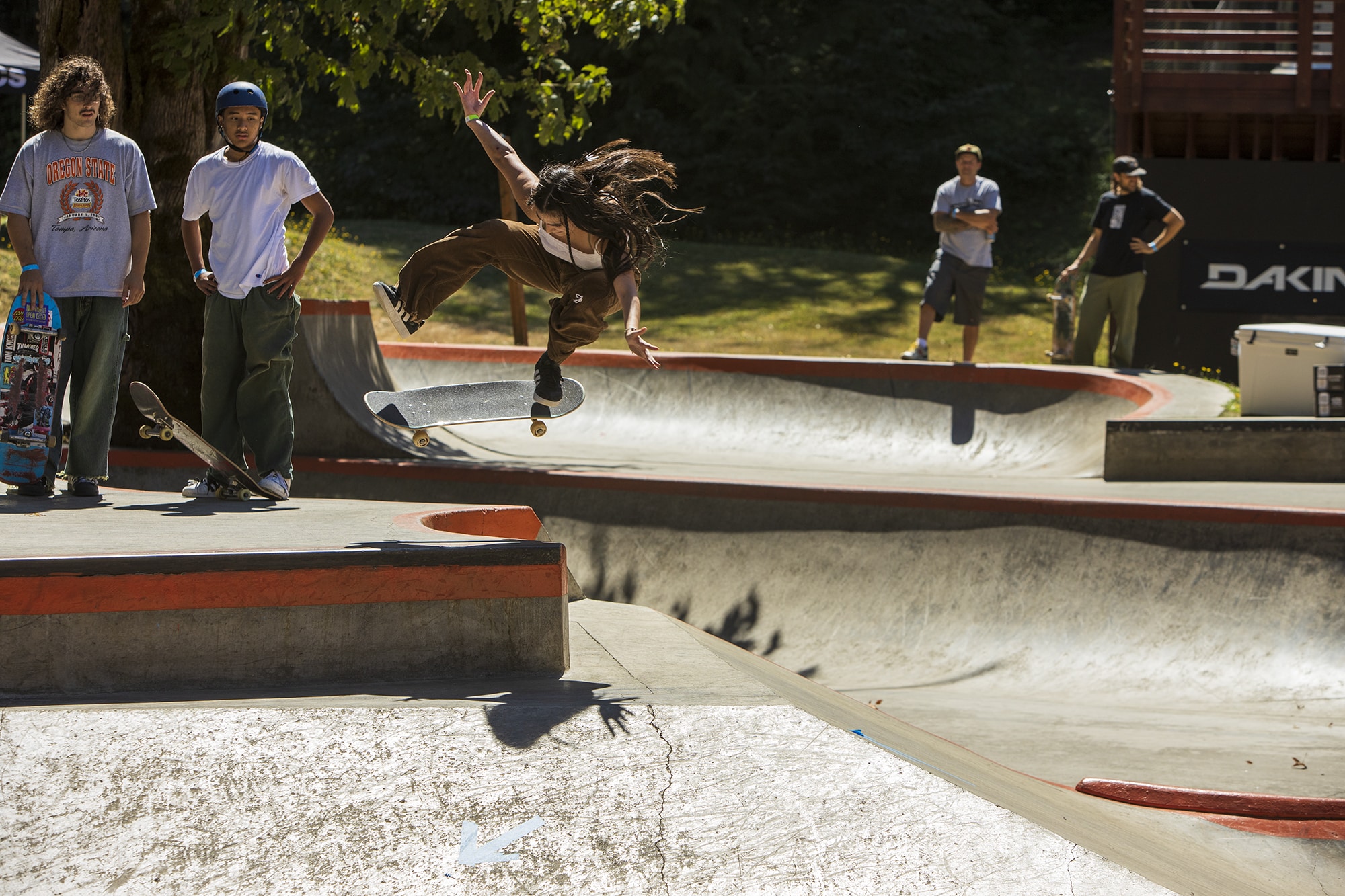 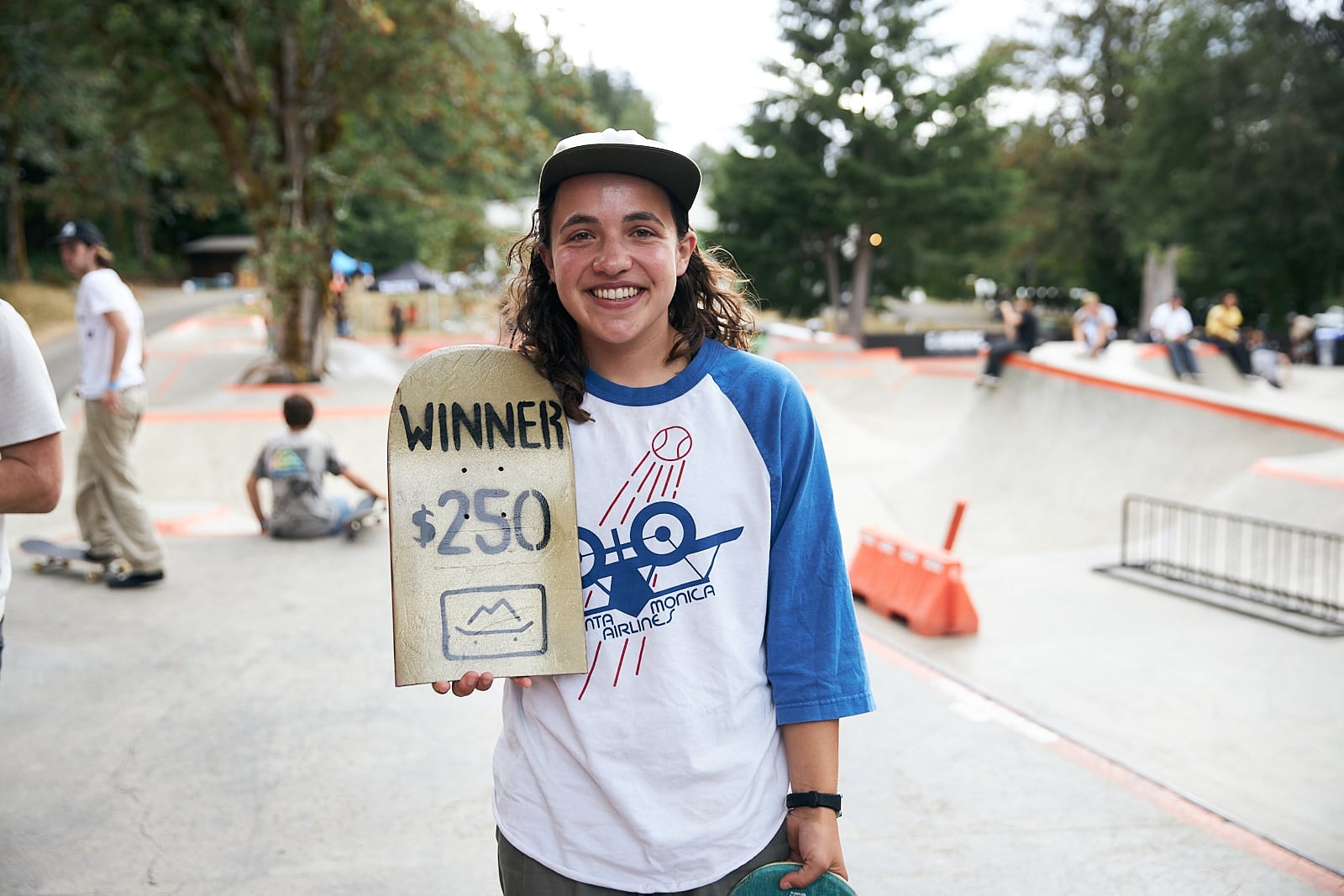 As we nestled into a few beers courtesy of Migration and Rogue Brewing, the rumors spread around camp that Uma Landsleds, Evan Smith, and the merry band of pranksters Maite Steenhoudt, Cody Chapman, Roman Pabich and friends had arrived. They were skating BOB (Building Out Back), and the rumors were verified with the sounds of techno bass blasting from Willis Kimble's trusty SOUNDBOKS and fanatical screams erupting from atop the hill.

(Can we upload a video of Maite trust fall unlisted). ??UMA EDIT??

As we approached the scene, the Tactics registration tents and countless crushed cans of beer were in front of BOB's doors. The Uma team and other merry pranksters gathered beneath, taking shelter. Outside the tent was a line of skateboards propped up in primo scattered out in some form of a line and dubbed "The Gauntlet." Humans were attempting to cross "The Gauntlet" and few successfully made it. Many of us witnessed more slams watching this than we had all day. You may ask, what is the point of this? It's called fun, you dummy. It turned out Uma did have a jam session on day one, it just wasn't what we thought or at all according to plan. Isn't that skateboarding?

Waking up on day two was hazy in a few ways, from Migration double IPA's the night before to the low-hanging fog and drizzle in the morning hours. Stepping out into the concrete jungle, we found Seek Skate Director Bryan revving an industrial leaf blower to dry the park as fast as possible. After a brief discussion asking him how the rest of his night was and hearing that shutting down BOB and the unofficial "Uma Jam" at 2am was part of it; we can probably all agree that news didn't come as much of a shock. 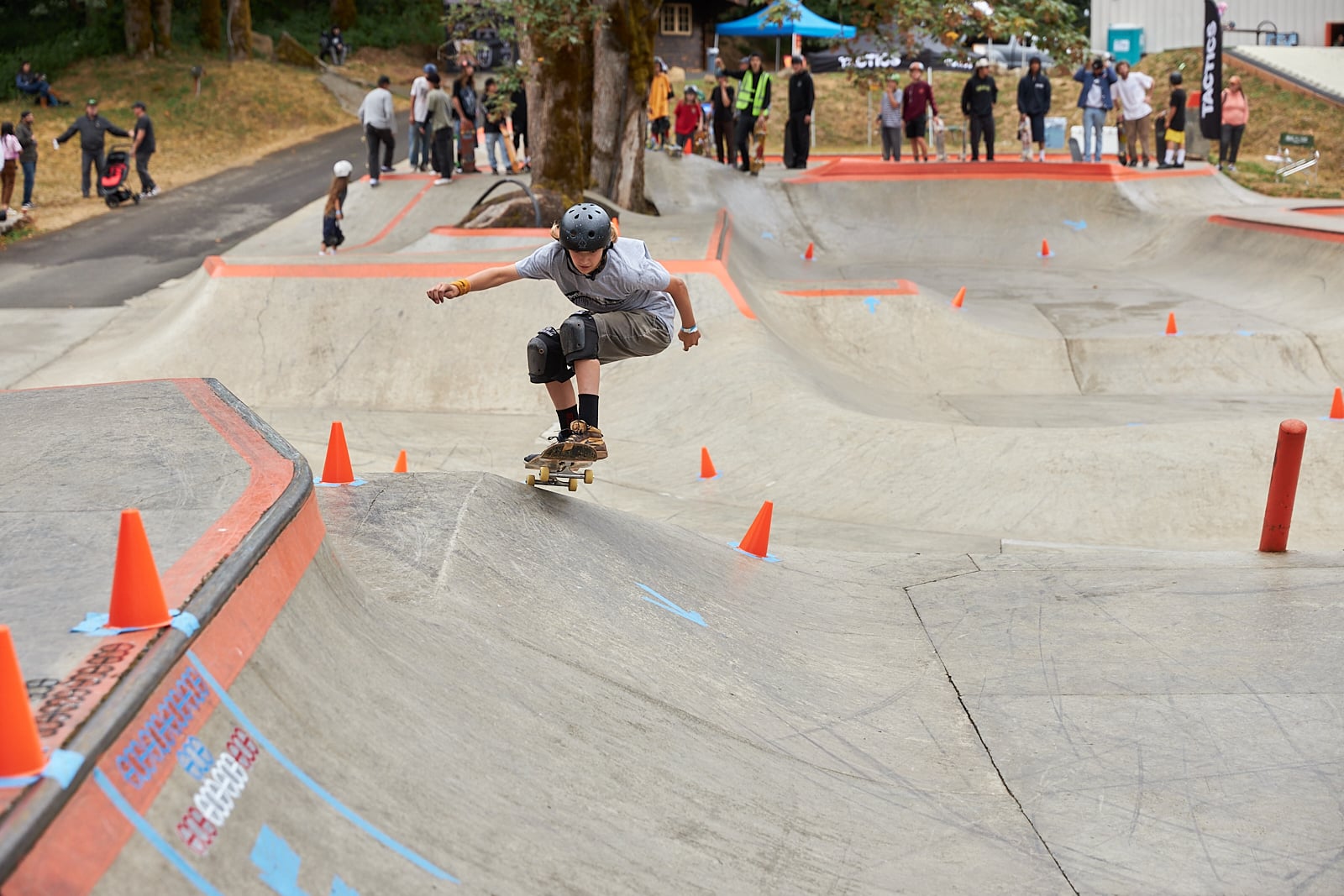 Unknown ripper going MAC-10 on the Wake and Skate course

Once the concrete was dry, the day's activities kicked off with the Ace Trucks Wake-and-Skate. The groms and early birds were out in full force, pumping through the park at top speed through a pre-outlined course for their chance at some time-trial glory and prizes. Needless to say, those who participated got warmed up quick and were ready for the day ahead. 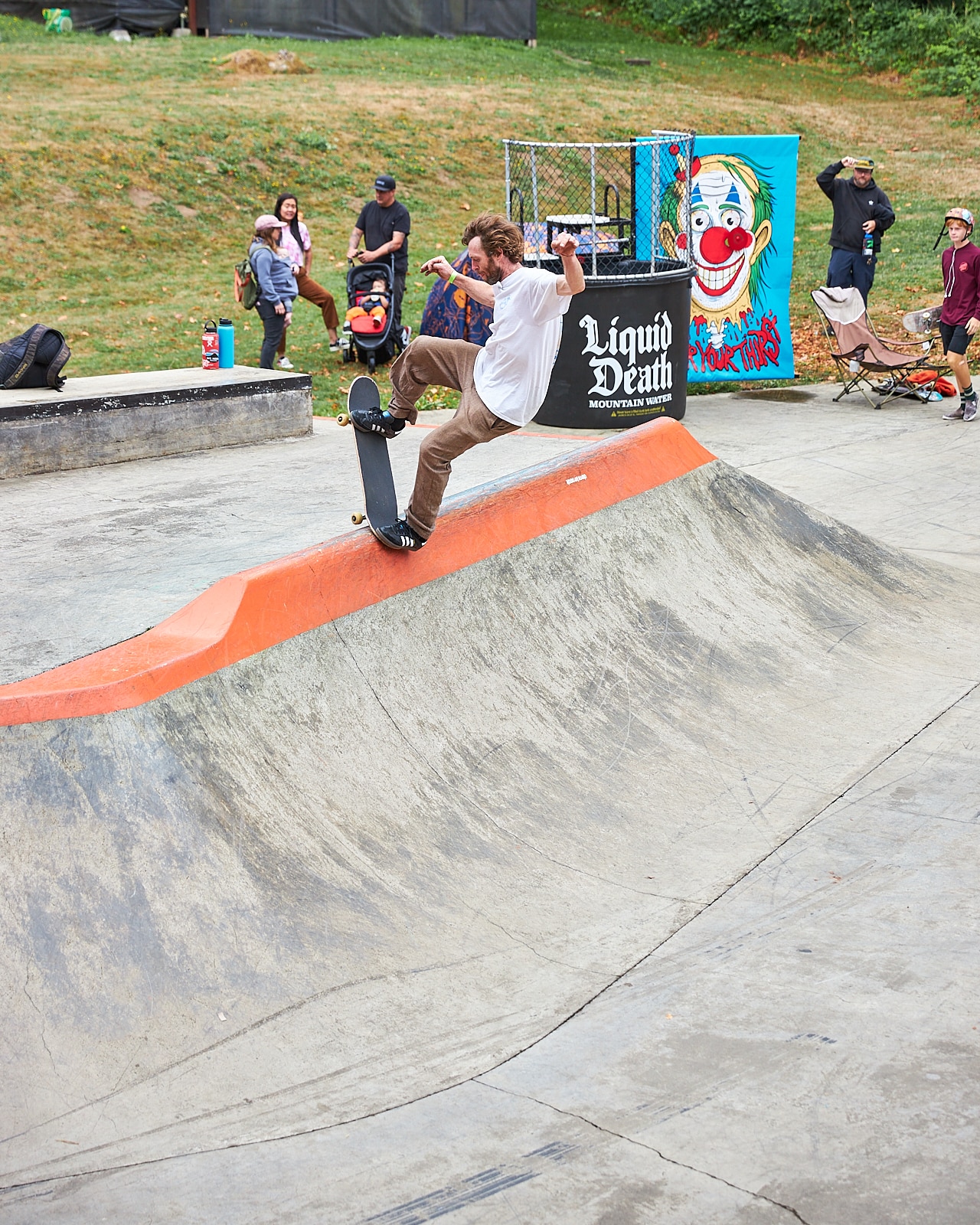 If the wake and skate didn't get everyone moving, the Pro-Tec big wall jam was sure to do the trick. In this jam session, the large transition skaters crawled out of the woods and were out for blood. Kevin Kowalski and Jake Solver put on quite a show, but Casey Tratz and Chris Russel stole the show and rode away with a pocket full of cash. 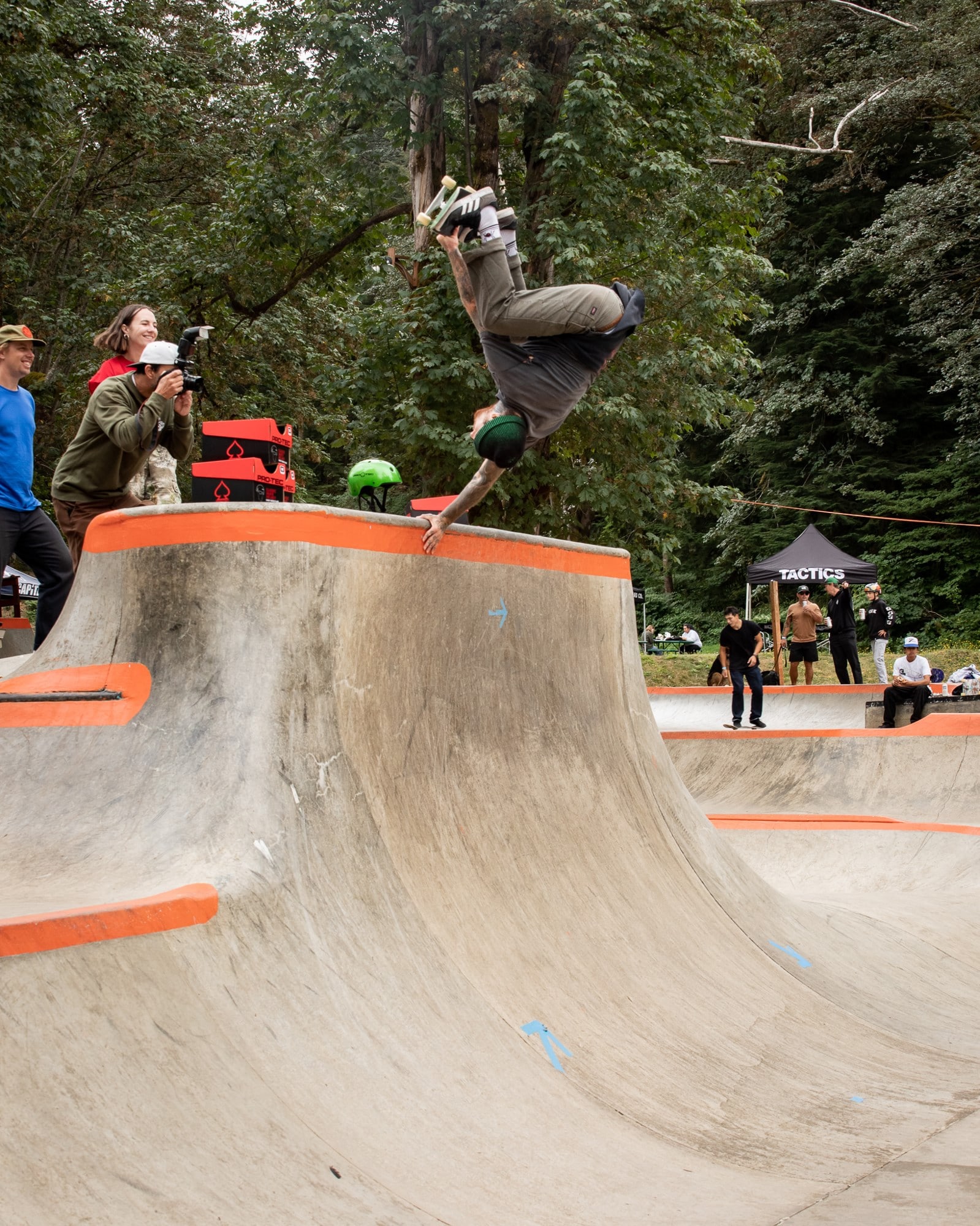 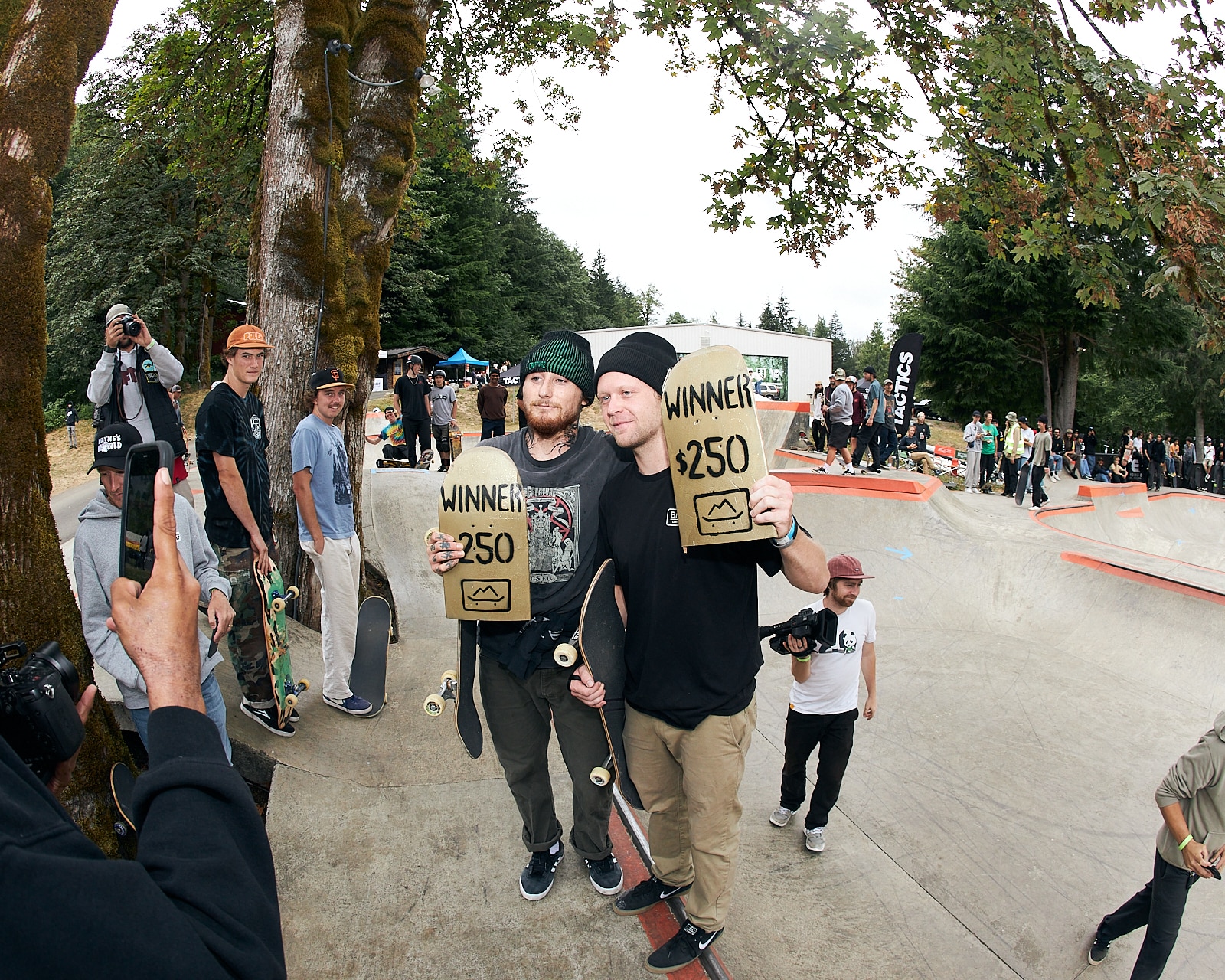 The Uma Landsleds jam was next, and it turned out to be the unofficial main event. The Uma crew descended into the park, speaker turned up to 11 blasting a Slayer, a case of beer, and most of the gang hanging out on top and on all sides of their team van. The vibe was reminiscent of the night before, but it wasn't "The Gauntlet" the challengers faced. It was the often forgotten about QP at the very front entrance and "you've got to get above coping to get paid." The QP was also the first concrete feature ever built on camp grounds, so the sentimental value for some was second to none. 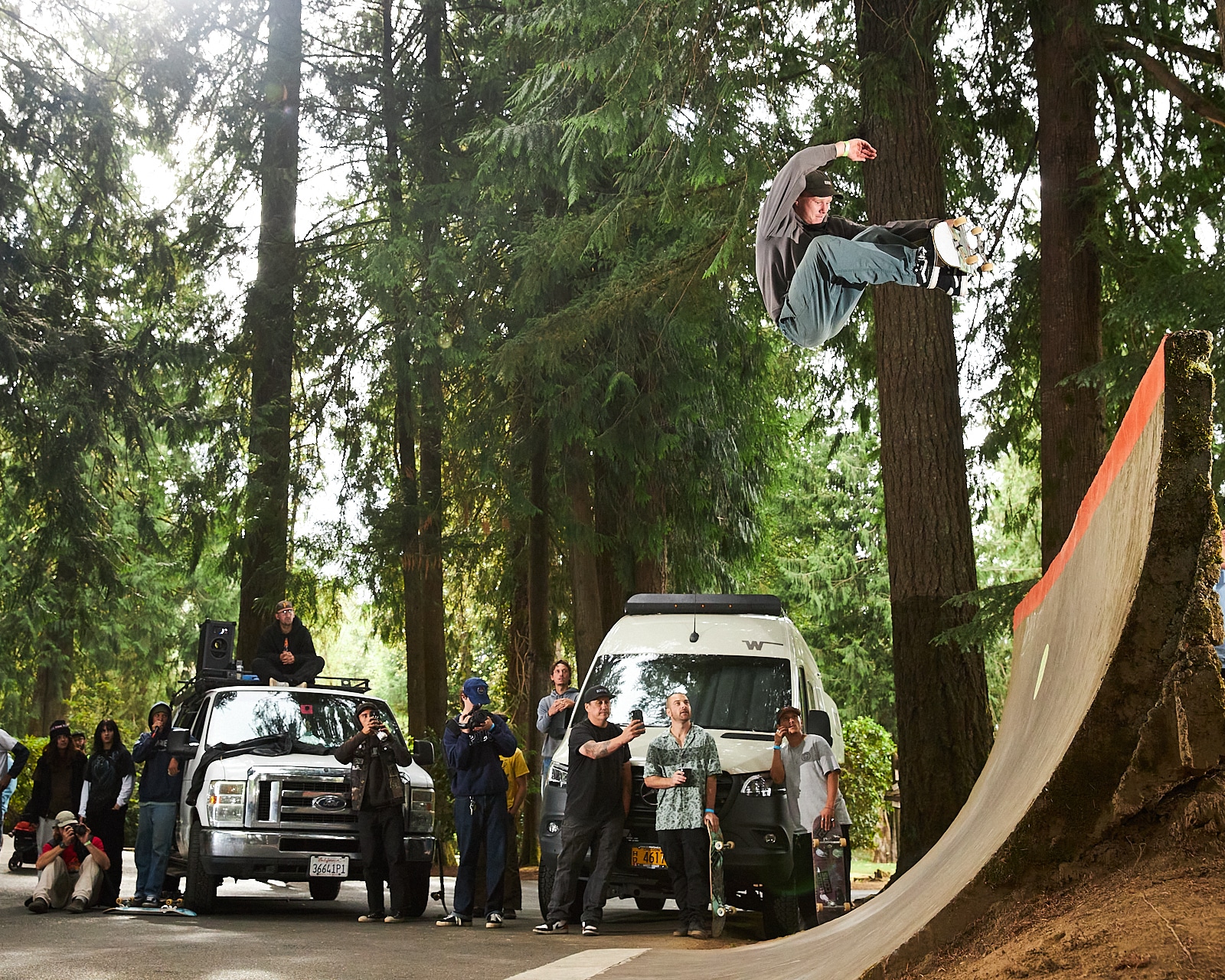 Roman Pabich had no problem with that critera 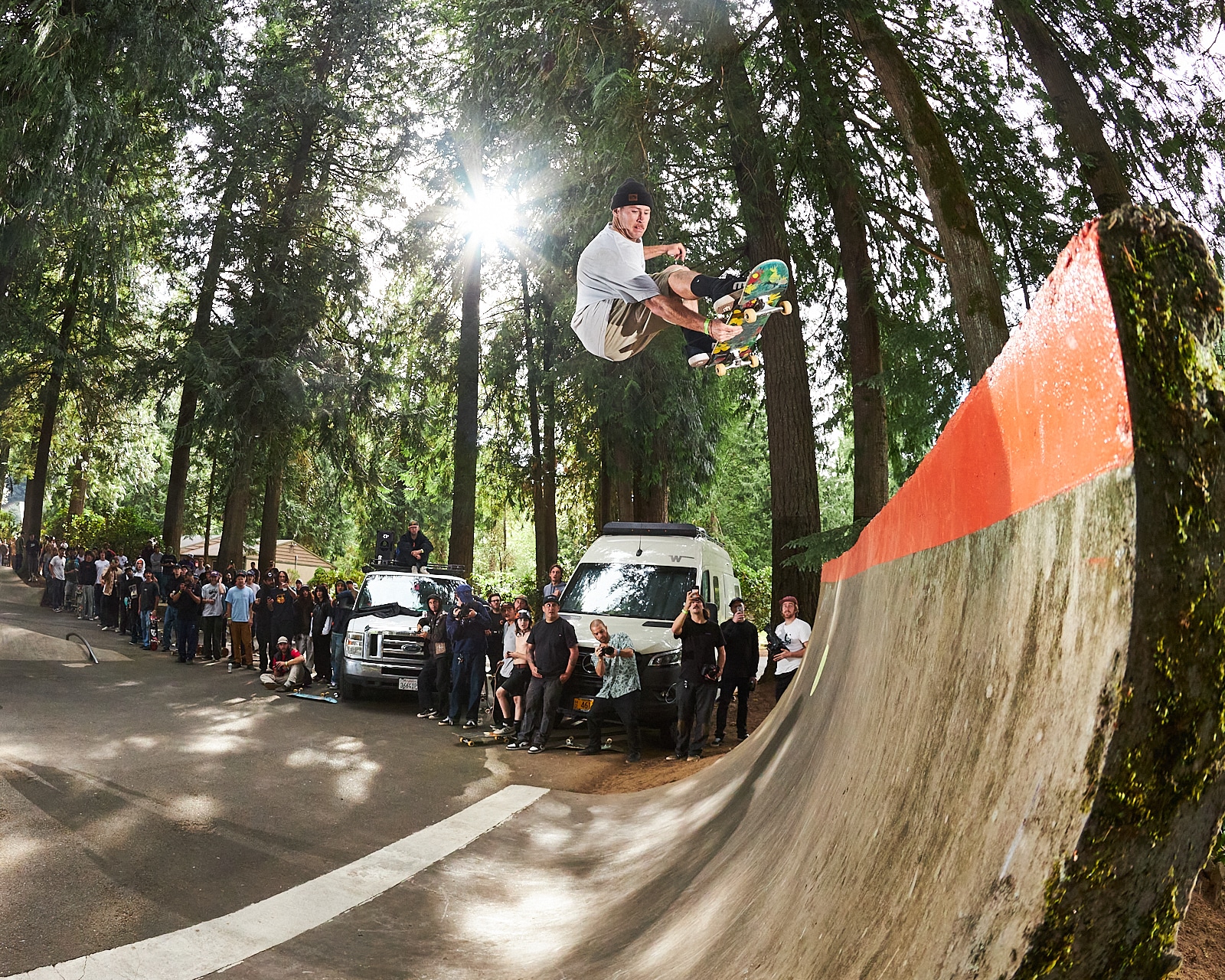 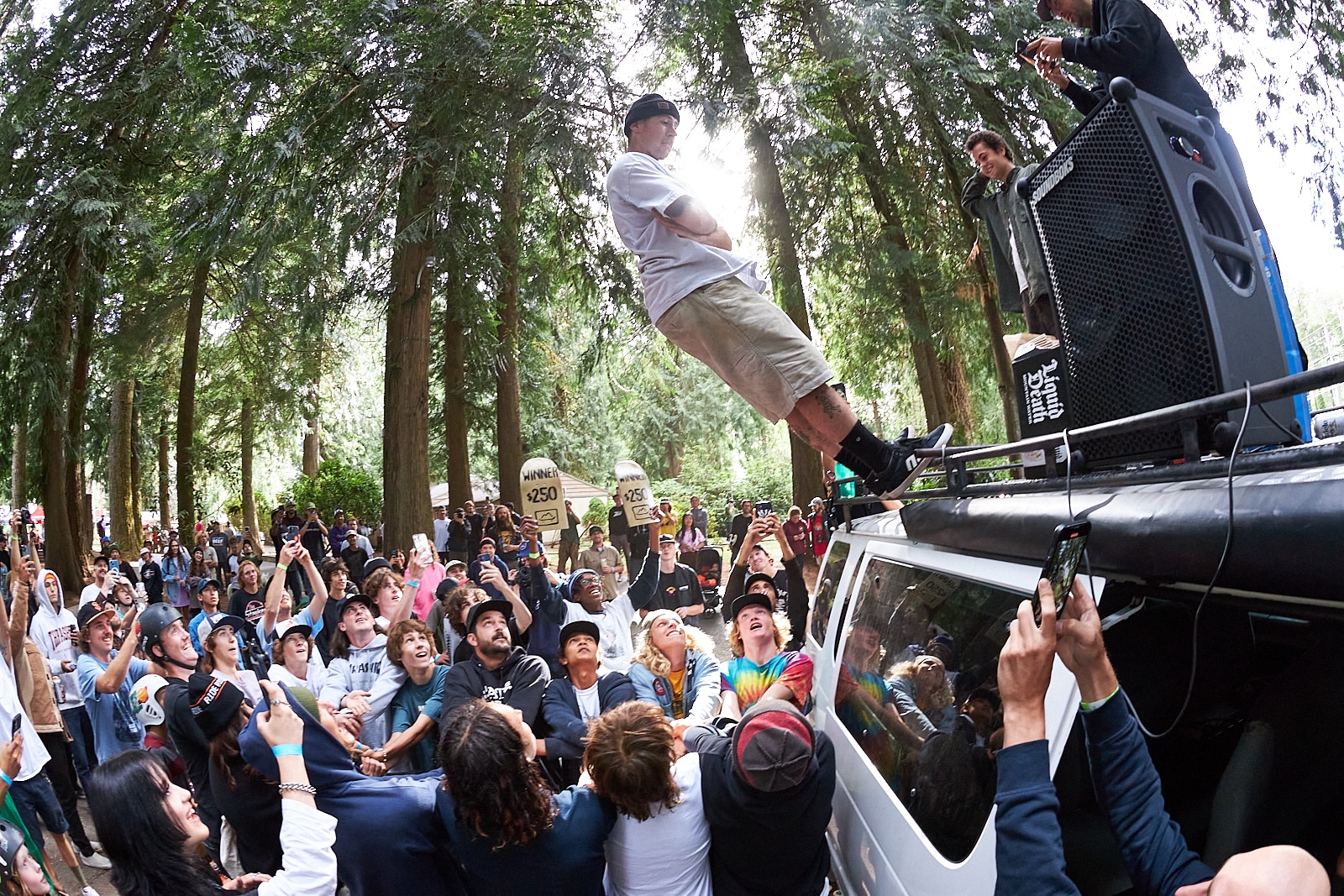 The bar for the rest of the evening was set high in the wake of the Uma jam. Next up was a special donation from the brand with the three stripes. Adidas delivered a trash can... and a ton of shoes. The trashcan used was a duplicate of the famous garbage receptacle that no average person should be able to nollie heelflip over, but Tyshawn Jones did it with ease not long ago. We set it up in a more user-friendly manor, and this time Silas was the one judging. The pressure was on as the past SOTY was watching every trick go down. 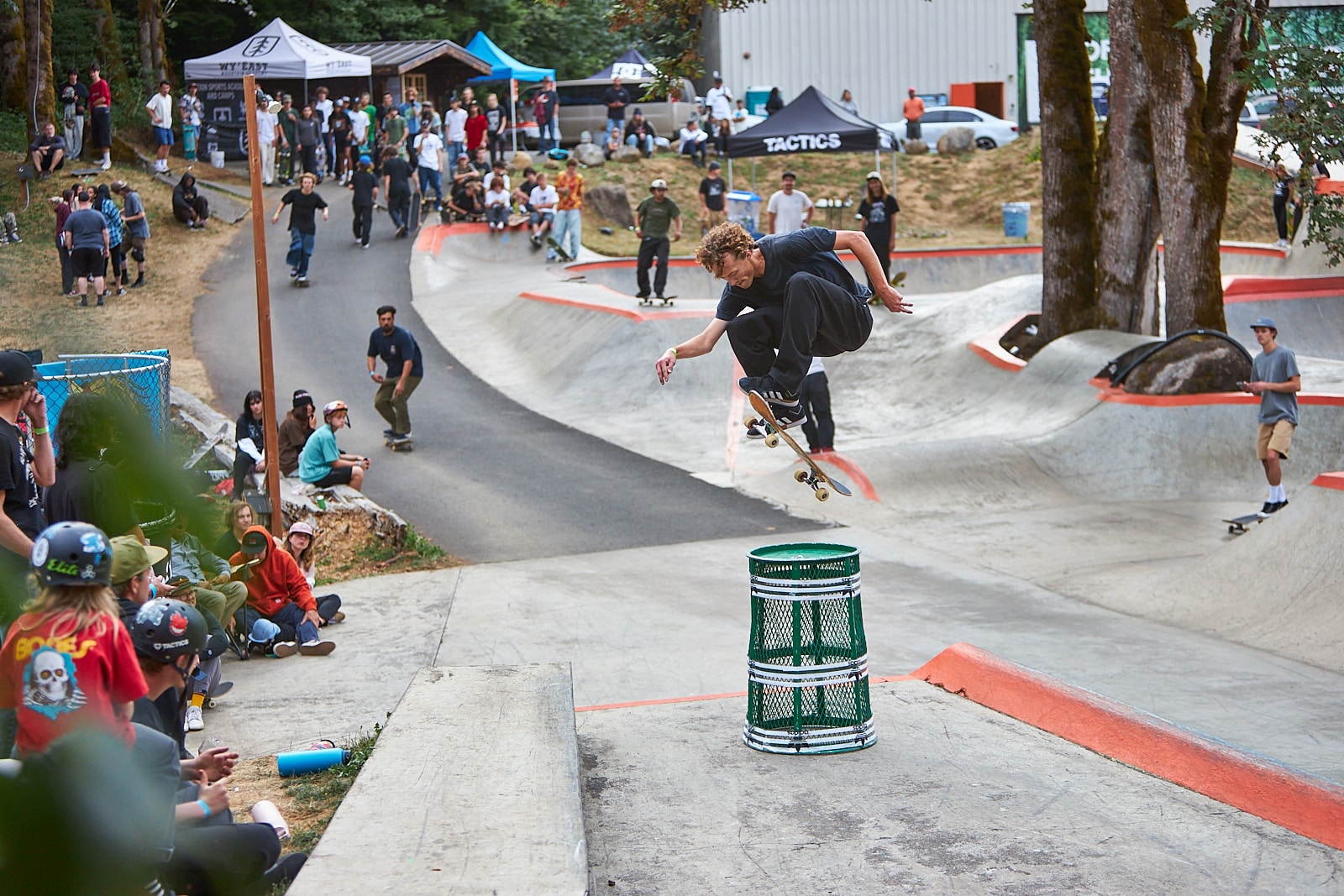 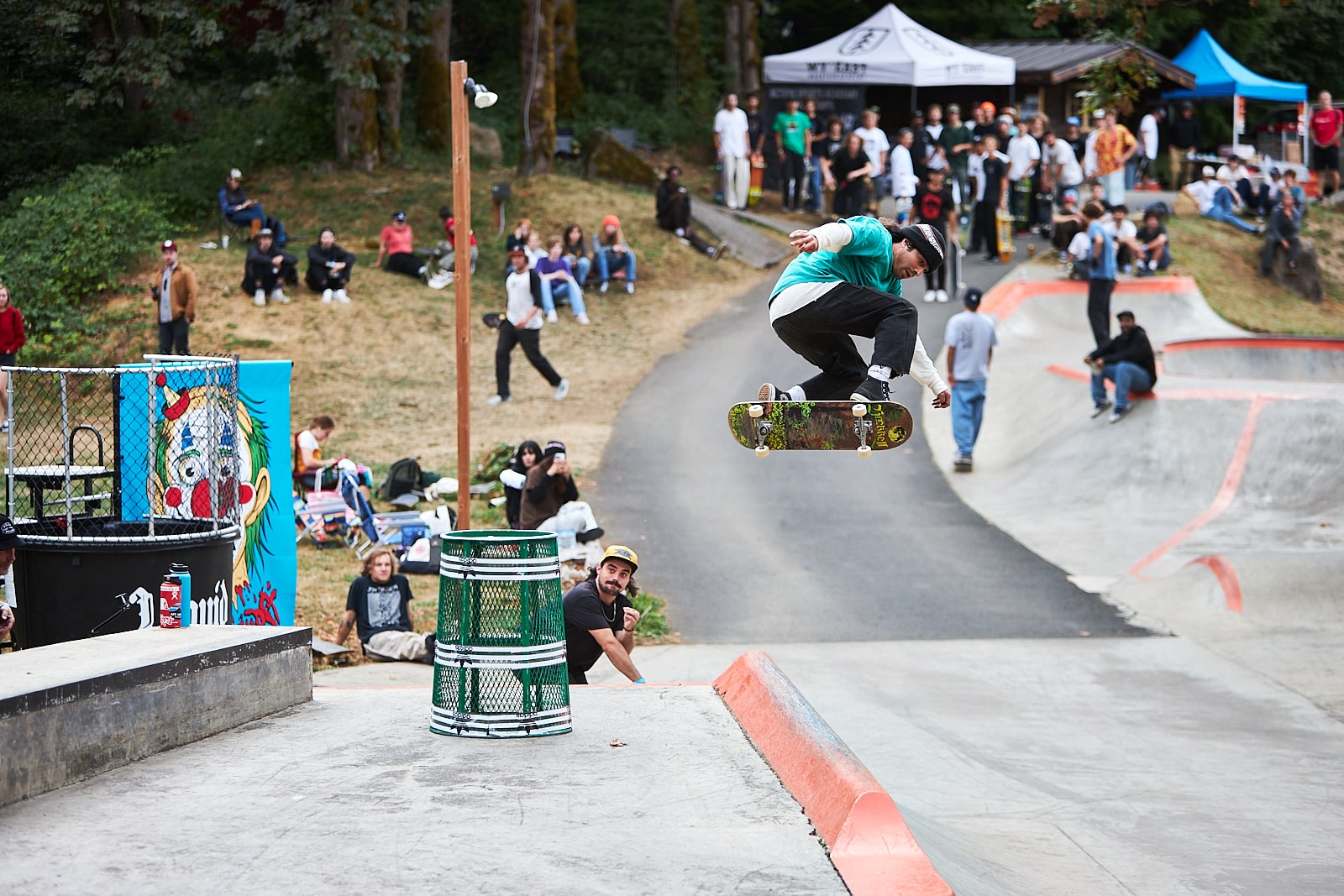 The morning of day 3 came fast; the events of the days before and the events around camp on Saturday night (See the video to find out what we are talking about) had been a blur. The excitement and vibe remained high as everyone warmed up and prepped for the first event of the day, the Yeti cooler jam. 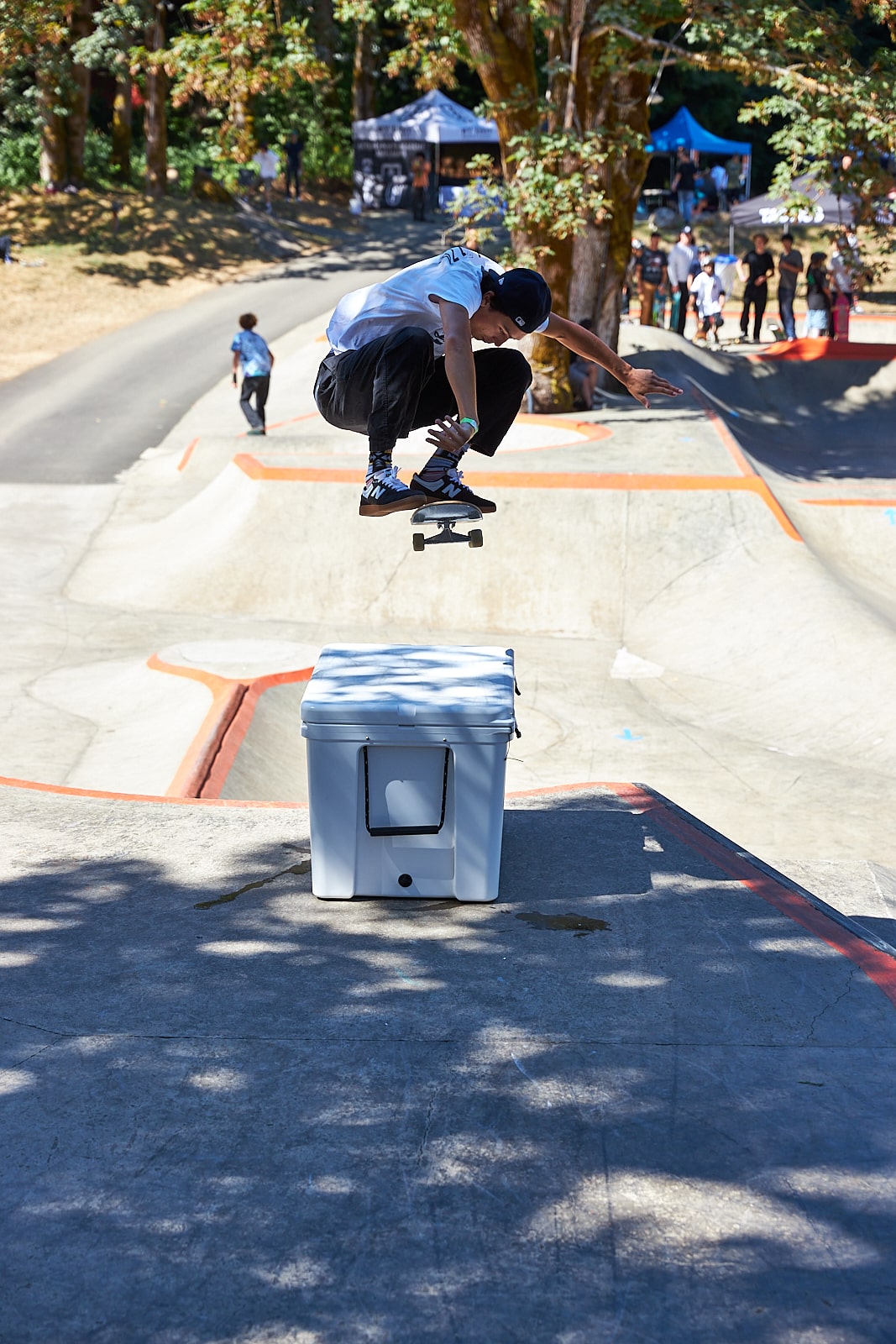 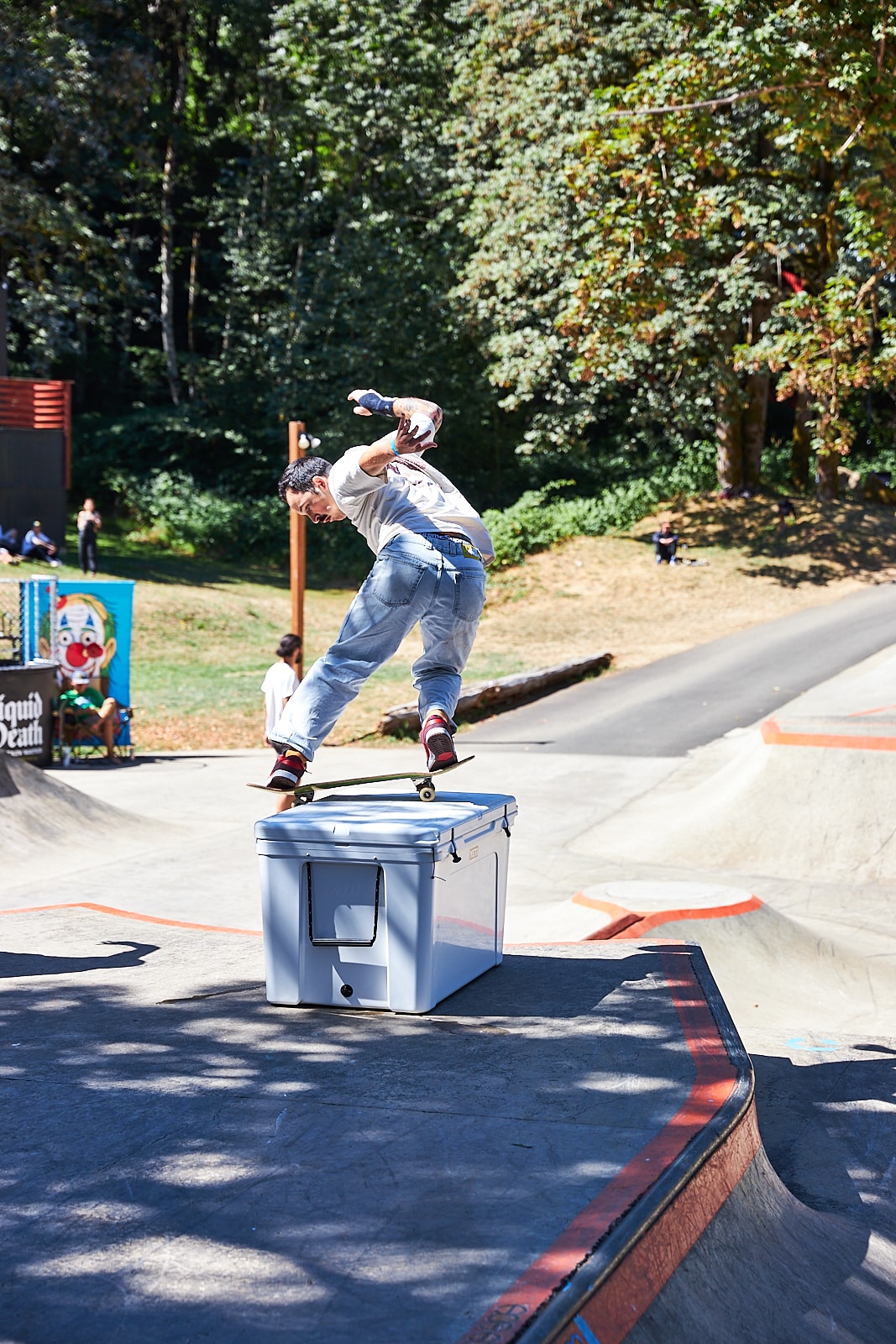 Off The Wall was an understatement for the next session of the day presented by Vans. We had our version of a pool party in the upper pool just below BOB. Rippers Davin Wynkoop, Liam Helberg, Sid, and other locals were mashing coping like true PNW residents know how to. But Kowalski and Helberg were the ones to take home the cash, and for good reason. 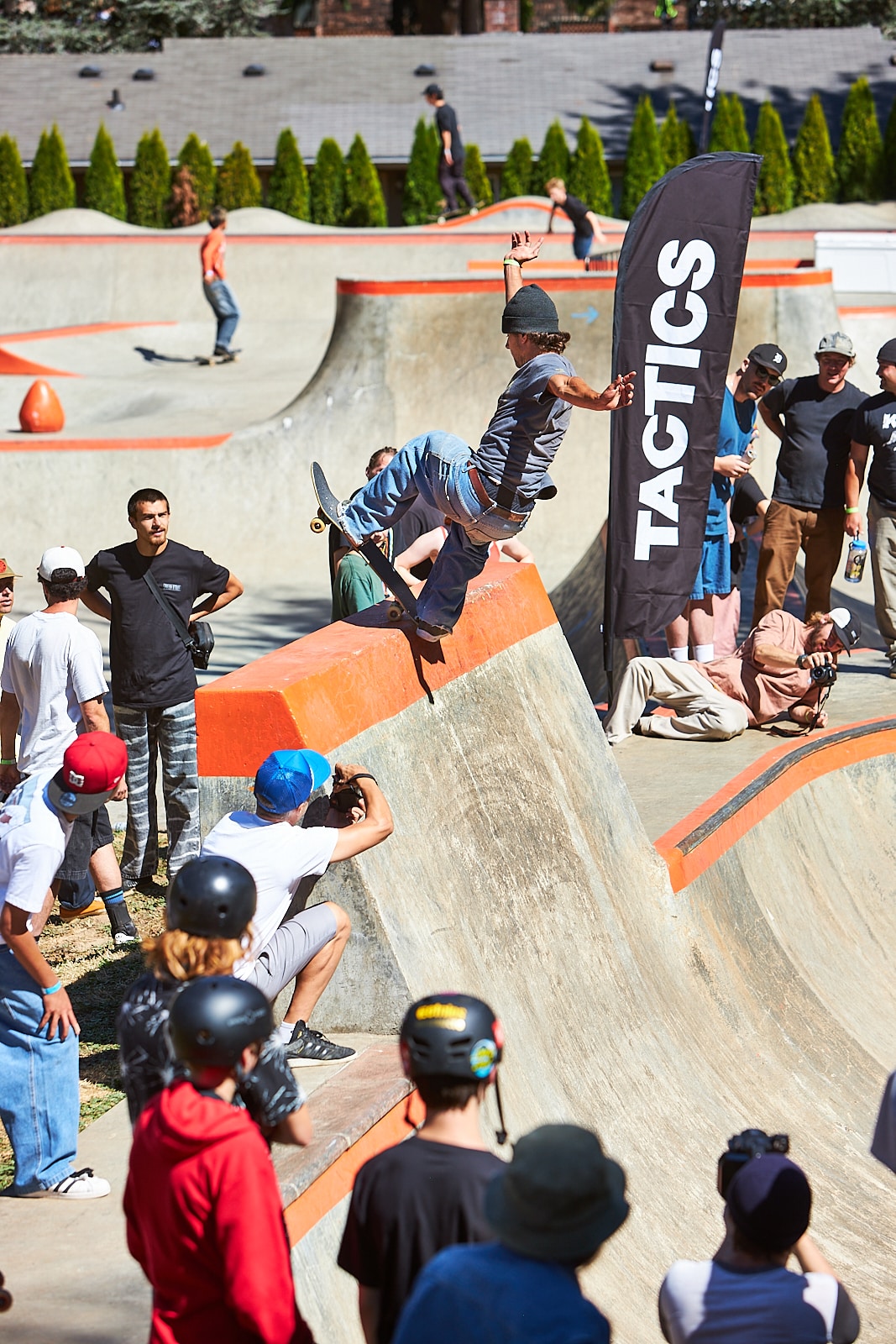 Helberg putting the icing on the cake

The final event of NWO may or may not have been the most chaotic. We kicked off the Roark spine jam with the clock winding down on this special weekend at NWO, and the skaters seemed determined to get their last piece of the $10k. We have said that people were flying everywhere earlier in this recap, but this time it was up to 8 people skating at once. True madness if you ask us. 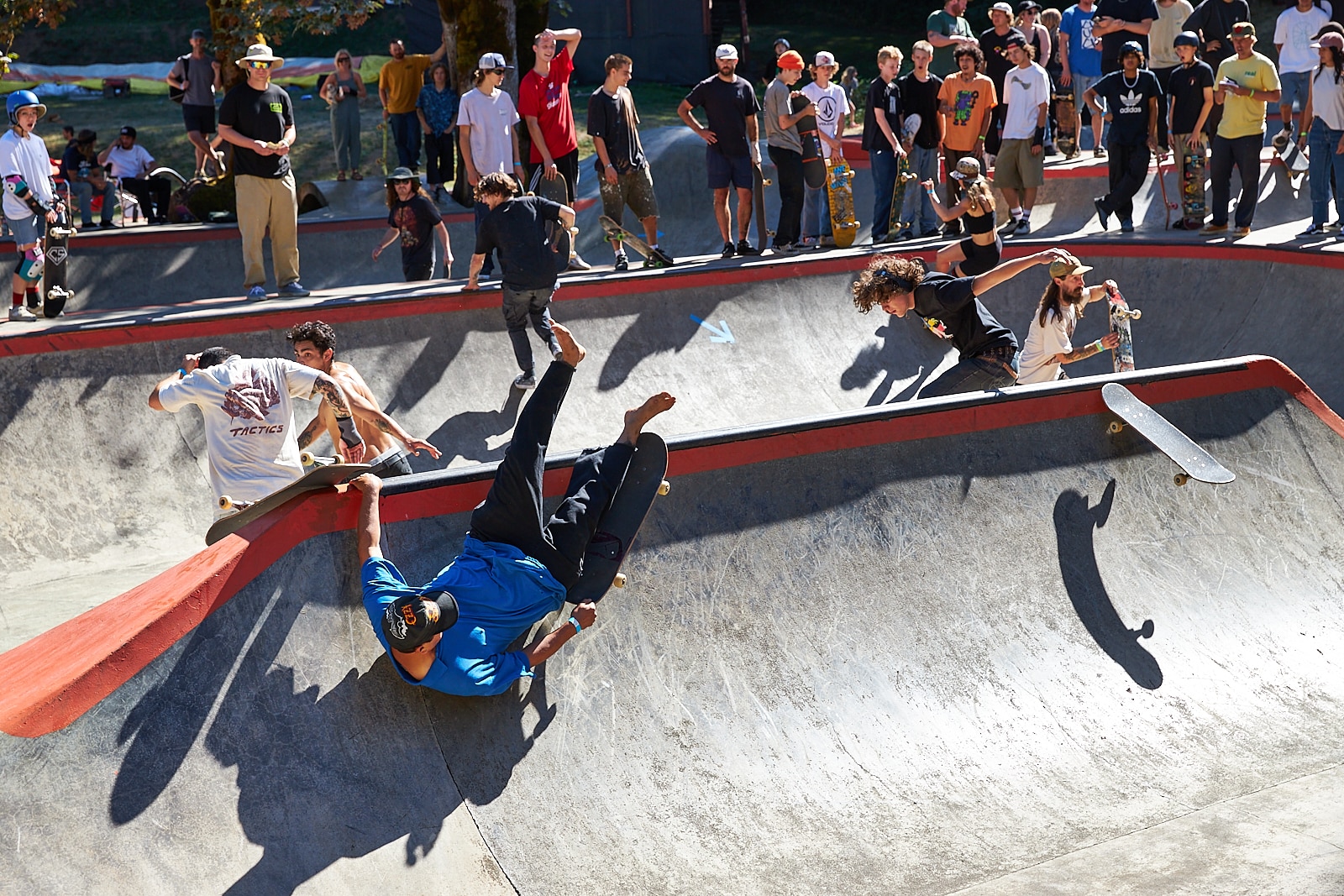 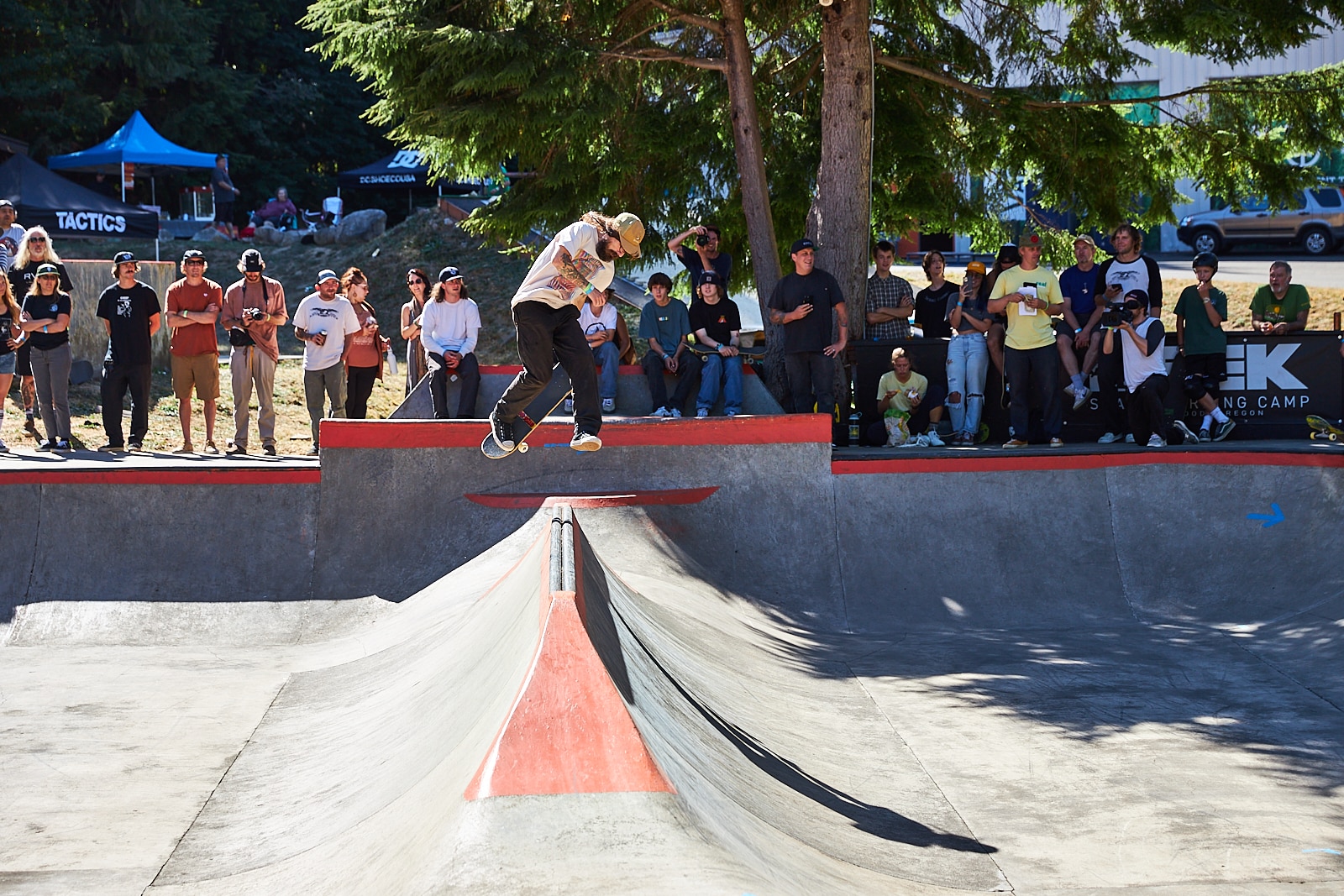 As the clock started inching closer to the final hour of the the first annual Northwest Open, the last thing to do was have Camp Director Gregg hand a special plaque to the main who created all of the concrete fun that made the Seek grounds so special. That man was none other than Jamie Weller. He was the architect behind the amazingly unique park design and helped pour just about every inch of skateable concrete on the camp grounds. This was a special moment and a real tear jerker for some.

If you ever visit Seek Skate camp, be sure to head into BOB and see the full size plaque where Jamie is forever immortalized in the main entrance way. 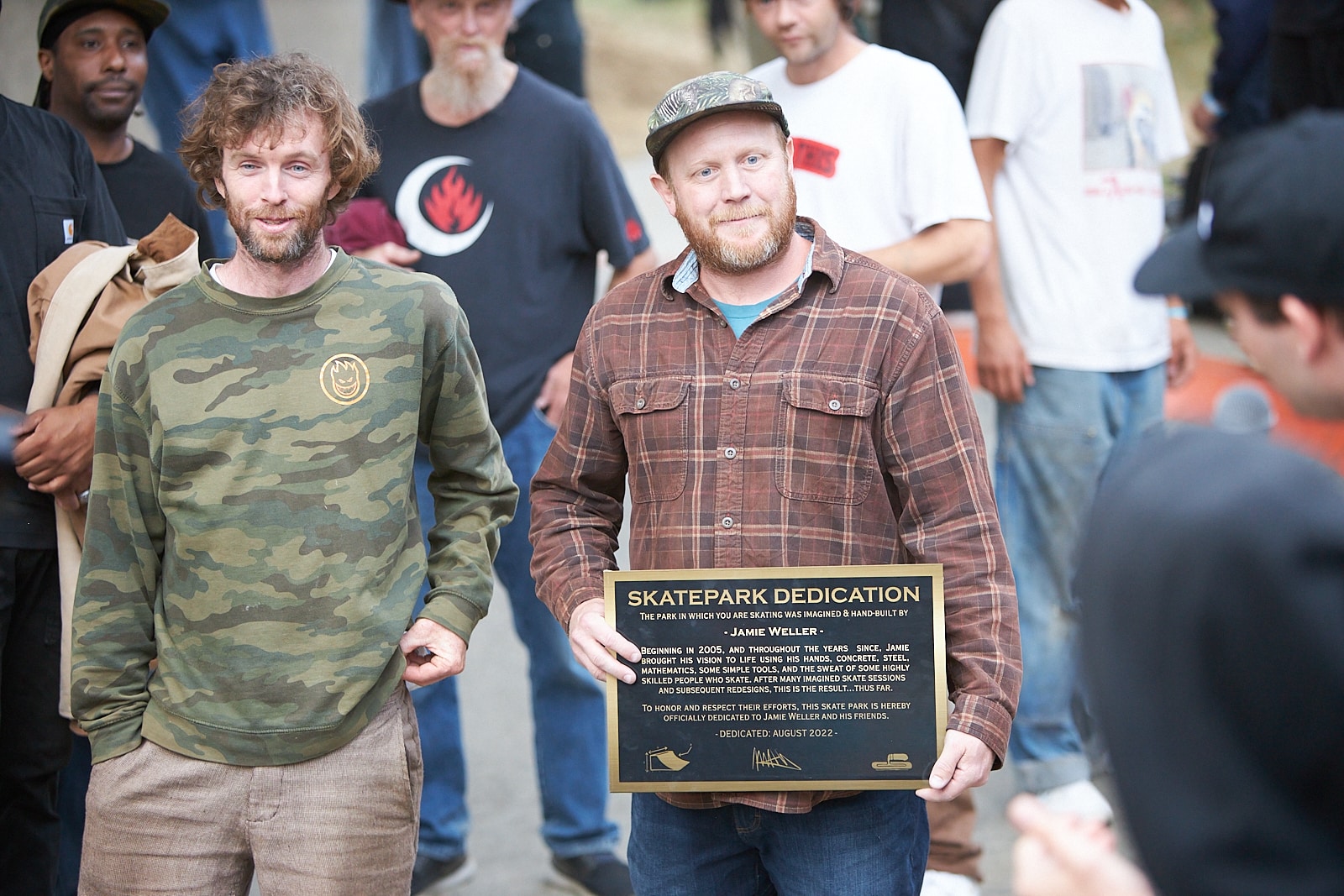 Thank you Jamie Weller for your dedication to PNW skateboarding

Closing the gates on the first annual Northwest Open was a feeling we couldn't quite describe. Yes, we were exhausted from skating our hearts out and abusing the concrete at Seek, but it felt like the fun was never going to stop. It was a true blessing to share three summer days in the woods taking in all that PNW skate culture has to offer.

Our hearts are full and we can't wait to do it all over again next year.