In the midst of a global pandemic, a social movement regarding racism and police brutality caught fire. This movement prompted us at Tactics to take a look at ourselves to see how we could help to create a better environment for our BIPOC community. Art and skating and snowboarding have always gone hand-in-hand, so we set out to display a piece of art that would serve as a reminder to all passers by that racism has no place in our community and that all are welcomed. Through mutual connections, an emerging artist from up north helped us to see this project through. Amiya McInnis came up with the sketch in just days and then got to work creating her mural on the front of our Eugene shop.

Learn more about Amiya and this project and then check out her other works on Instagram at @gimme_themarker/ and @mightyy.my. 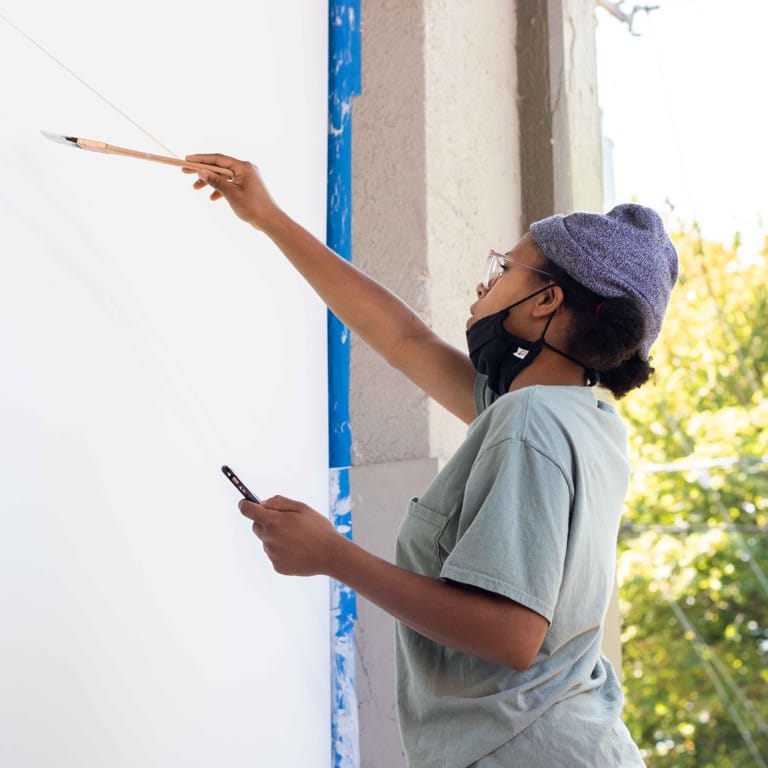 Where are you from?

Can you talk about how this project became a thing?

AM> Kelsea (from the Eugene shop) hit me up and was talking to Grace (also from the Eugene shop) about my art and stuff. They’ve seen my art and Grace has one of my tattoos, so they reached out to me and I was like, ‘Uh yeah I’m gonna do that!’ I didn’t even have to think about it, as soon as I saw that text I was like, ‘I’m gonna do that,’ because it’s a once in a lifetime type of deal. I immediately started thinking about what I could do that would be good and speak to a broad range of people.

What was your inspiration for this mural?

AM> I wanted it to have something to do with skating, but also what’s going on right now. I wanted to make something that would look nice and include people. Originally, I was going to have somebody skating out of the pool, maybe doing a grab or something. But I didn’t want any single person to be in the middle, so I changed it to the sun.

How does skating or snowboarding cross-influence your art?

AM> I see a lot of artists that are also snowboarders and skaters, and they’re really good. Like Desiree Melancon, she’s super good, her art is awesome and she’s a fucking awesome snowboarder. There’s other people I follow on Instagram that skate or snowboard or do both and also do a lot of art stuff and design boards and graphics, and that’s so cool to me. 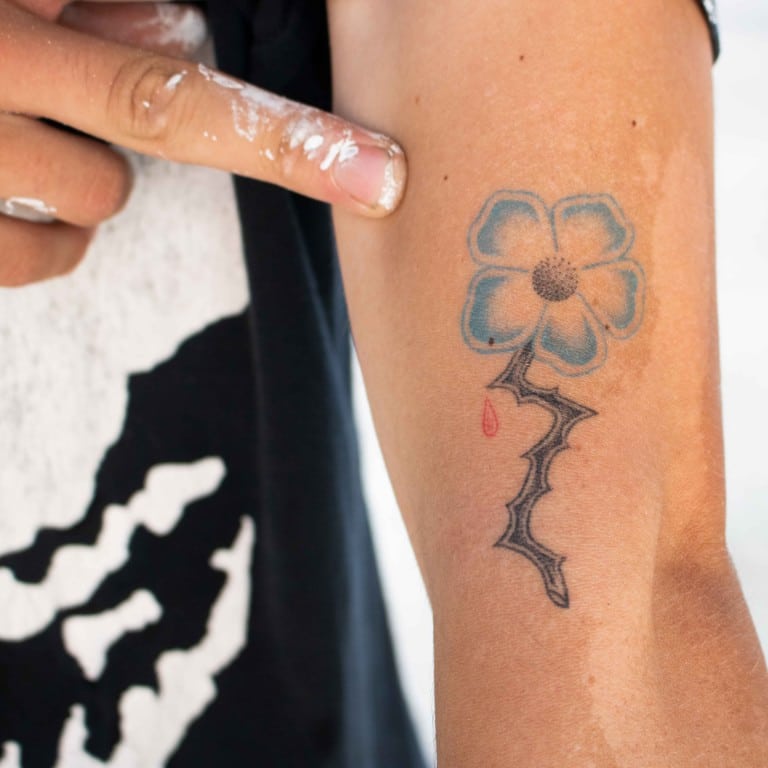 What degree are you pursuing at the University or Oregon?

AM> Ethnic Studies! It has to do with a lot of the social injustice stuff that’s going on right now actually. I started doing that before a lot of these protests started happening. With only a couple classes under my belt, I have a deeper understanding of what’s going on. I love to be involved with it and I want to keep studying it. After that I want to go to tattoo school, but I want to study since I have a scholarship to the UO and I want to pursue something since I can.

Coming from that background, how do you see projects such as these helping the community?

AM> I think it helps more artists be able to get reached out to. I’m just a student at the UO and skate at WJ, not really anybody. Like-minded people are finding each other through these processes. It starts good conversations too. 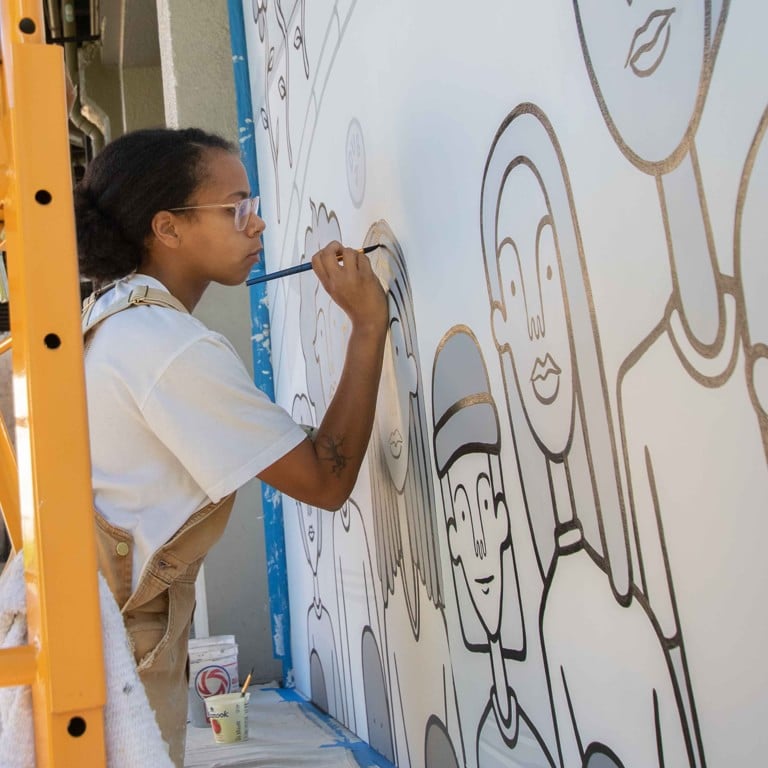 Have you seen a shift in women skateboarding and snowboarding around Eugene in the last two years that you’ve lived here?

AM> I’ve definitely seen way more girls. We have our Squirrels [of WJ] group chat with a bunch of girls and they always text for people to come to the park. So I see girls at WJ all the time. At other skateparks, I don’t really see girls. So WJ is really nice and familiar because of that. When I go in the morning there’s always a different set of people, and there’s some kids who are ripping around that are girls. It’s so sick to see that there’s that whole age range of people.

AM> Having girls go with you makes you feel comfortable first of all, and having them there to cheer you on and be like, ‘Yo you can do this,’ that’s super empowering. It’s really awesome. 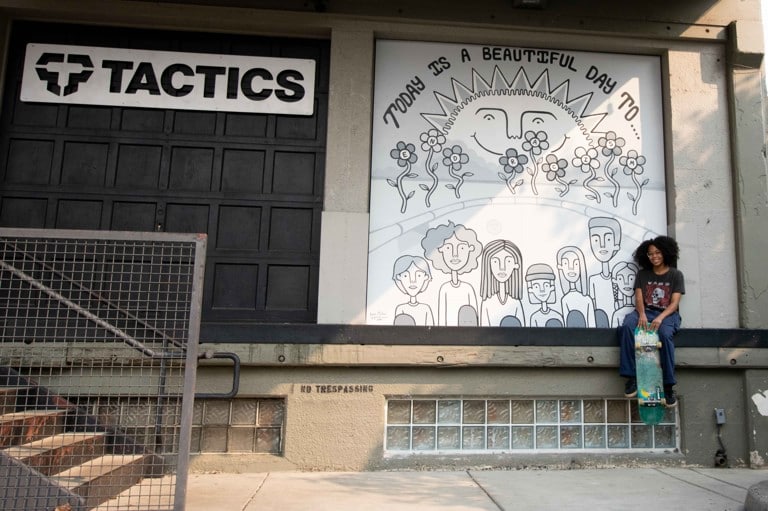 What do you hope people take from your mural?

AM> I hope that they would either hit me up and be like, ‘What can I do?’ Or go into Tactics and be like, ‘I saw this mural and I want to know how to support my community.’ My hope is that it’ll raise awareness and have people asking questions and trying to find answers.

It’s a heavy time right now for a lot of people and it’s good to highlight the good.

AM> It really is! Out of all of this, we all want what is better for everybody. That’s the point. We want to make things better for each other by learning, figuring out what’s going on and trying to fix it together.

AM> Thank you to everybody that is in my circle that I love!