The Goomba Slayer Video | Q & A with Adam Robo 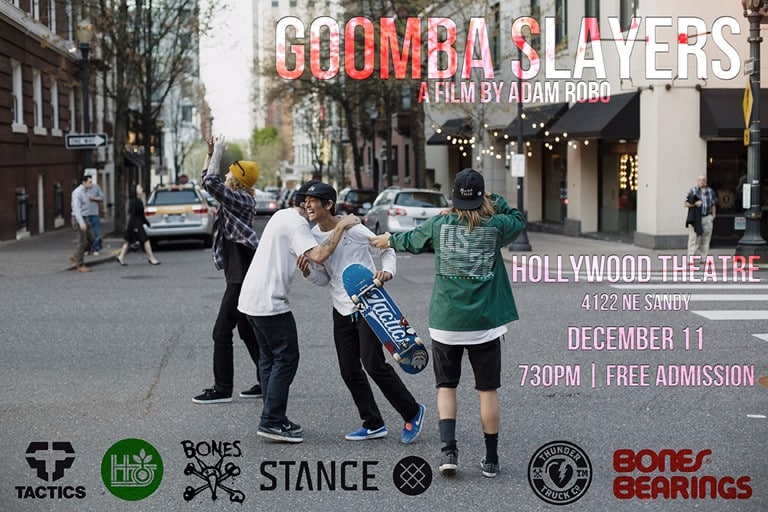 We are less than a week away from the premiere of Portland, Oregon's newest full length video, Goomba Slayers. Fresh off the stoke from his recent Faded video, creater Adam Robo circled up with a few guys from his last video, a couple new faces, and any other homies who wanted to send it for the old VX cam. We sat down with Adam to talk about who the Goomba Slayers are, what it takes to make your own video from scratch, and SD vs HD. Go behind the scenes in our interview below and head to the Hollywood Theatre in PDX at 7:30pm on December 11th for free admission to the official Goomba Slayers premiere. 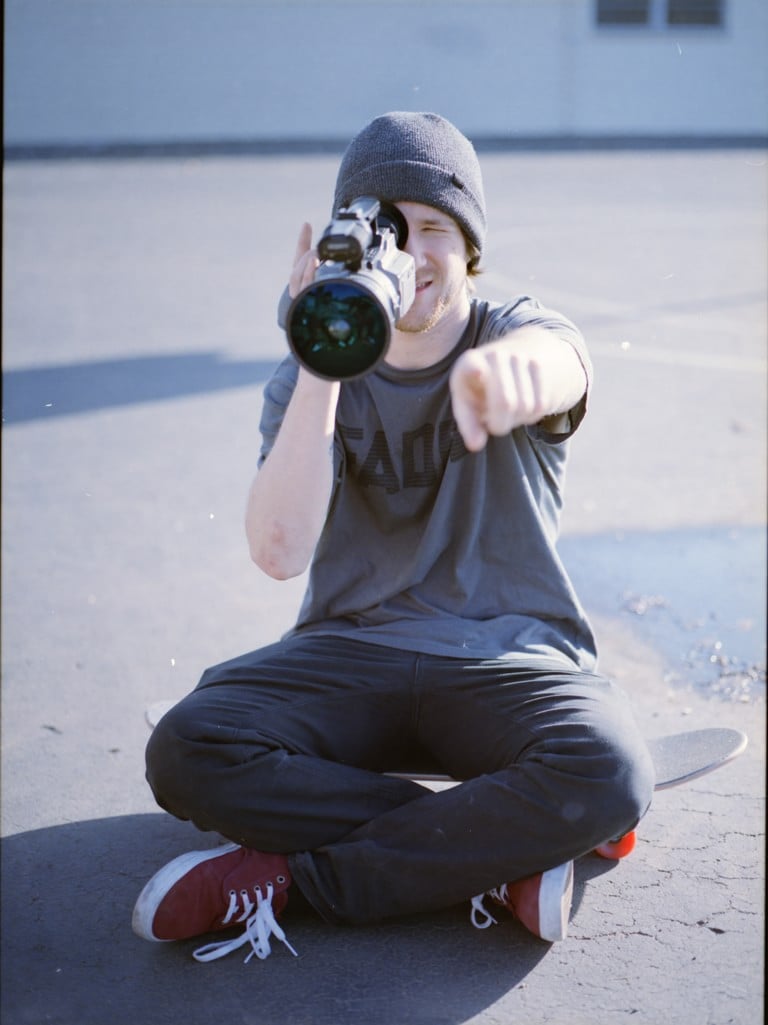 What's good man? How is the GS vid coming along?

What’s up man! Just finishing up all the final touches on the video and premiere at the moment. Mikey Carpenter and I just came up on two puppies a few weeks back so being house-locked has given me plenty of time to polish everything off how I want it. 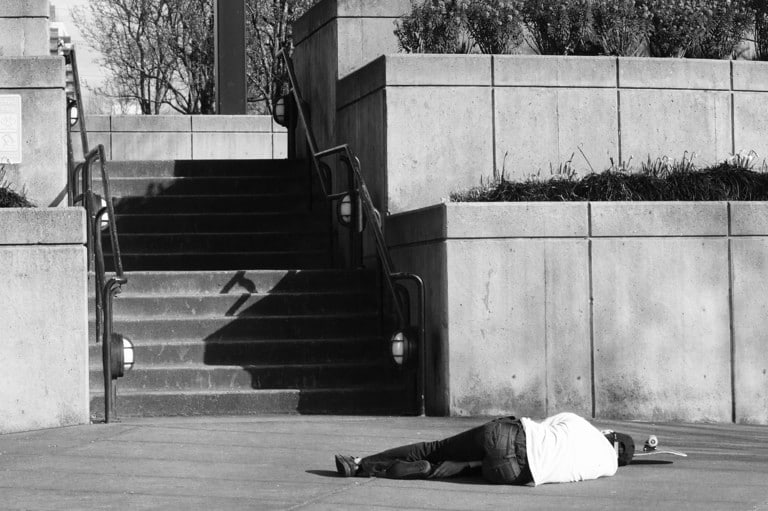 That’s good to hear, editing is a lot more fun when you don’t feel rushed to finish. So who are the Goomba Slayers and where did the name come from?

Pinpointing who the Goomba Slayers are, is a hard question. The simplest answer probably is whoever wants to be. It started like 5 years ago, I had just met Mikey out here in Portland and I got a new setup and we wanted to film a little fuck around montage with it. We got a bunch of homies to head out to Battleground and we skated and filmed all day. That night we were drinkin' back at my place trying to think of a name for it the montage. A few beers deep I jokingly threw out Marcass Carp since it was Mikey's childhood nickname and he added "and the Goomba Slayers" with no hesitation. Might have been since we were playing smash bros... But the next morning, hungover as ever, we decided that was the best thing we came up with and we stuck with it. We loosely began to call the crew we rolled around with that and over time we dropped the "marcass carp" and kept Goomba Slayers. Since then, we pretty much just call anybody we hang out with part of us. There's no special requirement or specific people, it's just whoever fucks with us. Anybody could be a Goomba Slayer… Shiiit, anybody who has ever let me point a camera at them is one.

That's rad that you guys are open to letting anyone come session with the crew. Who all is in the Goomba Slayers video? Did you pick people specifically to have parts or were you just down to point the VX at anyone that was down to huck?

Way too many to put in an interview response that’s for sure. I point my camera at as many homies as I can as much as possible. I had an idea to keep it stress-free so nobody would worry about having a full part. Nobody does really. Instead, whatever friend clips we got along the way are spread throughout the video instead of jumbled in one section. 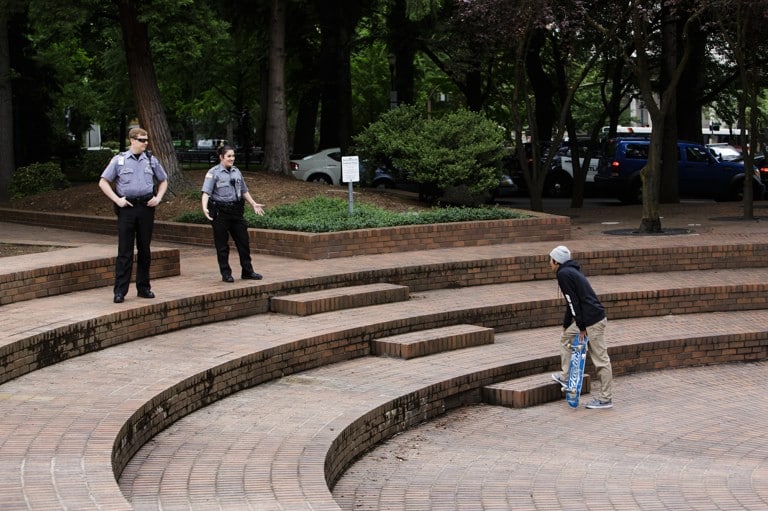 Can’t wait to see it. How long have you been working on it?

I worked on it for a little shy of a year. Pretty much since my last video. These kids just don't stop.

So you have been filming with a VX for a while now. Have you ever considered making the switch over to HD?

For pretty much every project I've ever worked on I prefer VX. To me it comes down to aesthetic preference. There have been some occasions where I've found HD cameras in my hand but to me it isn't as exciting. I've thought about switching though, but until they run completely out of tapes, I doubt I will. I've had this mad scientist idea to kind of mix the two. A VX body, sound, settings and everything to a SIM card instead of tape. Switch some of the insides around and make it shoot HD 4:3. I have this gut feeling it’s doable but I've asked around and been told it can't be done. 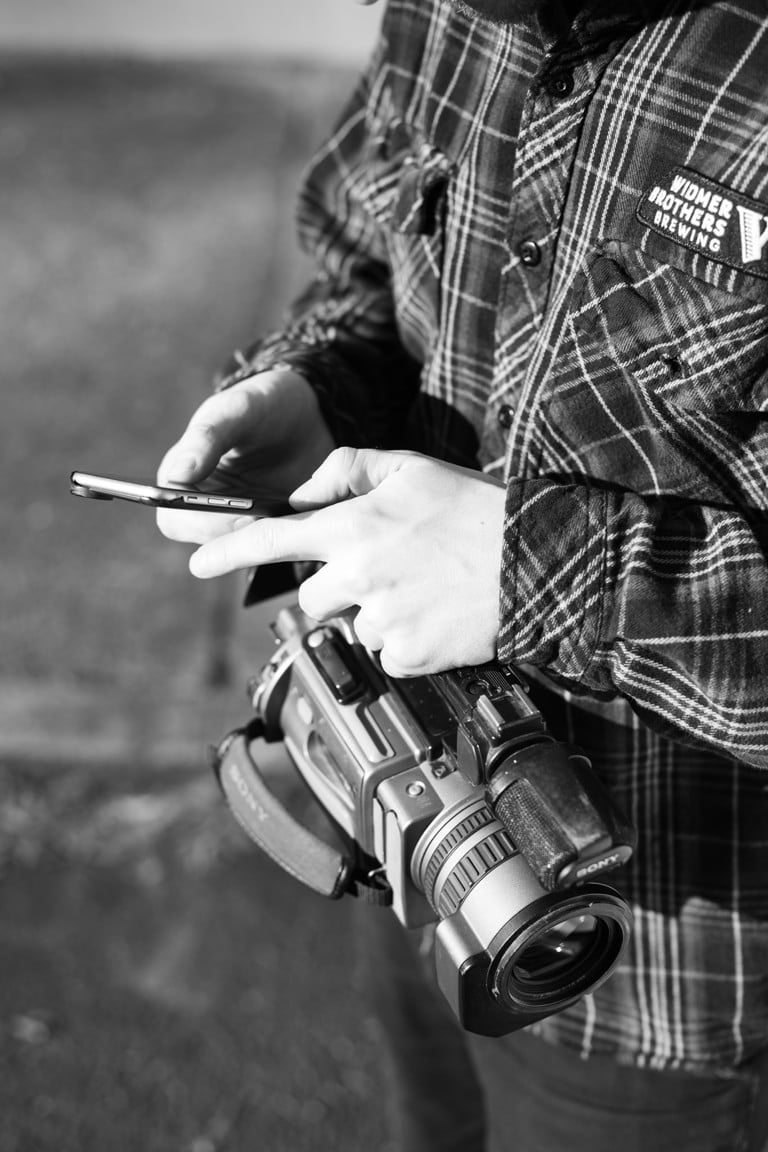 That's a million dollar idea right there. It seems feasible. Even if it was a just a new product that looked like a VX and only filmed in 4:3 SD. Kids would be all over that. You could call it the Goomba Cam.

Yo I back that idea! If there was somebody that could make that happen I'd pay some good money for it. It's like the best of both worlds.

Let’s do this! So you traveled quite a bit for this, where all did you go? You find any hidden gems along the way?

Yeah we went up and down the west coast, LA, Oceanside, SF, Seattle, Portland, Boise and some stops in between. Always a good time with the boys and meeting new homies! 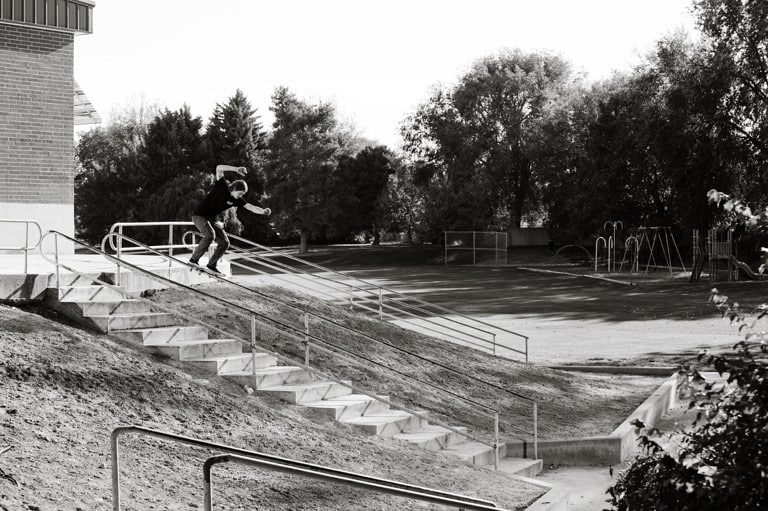 Always good meeting new faces. Who’s the GS underdog that impressed you most along the way?

Always a blast on the road! But out of all the dudes in the video I think Alex (Lobasyuk) surprised me the most. I hadn't filmed much with him before this so I didn't know he had so much motivation. Not only is he the youngest kid I've filmed with, I got to see him progress a ton over the last year. His style really came out and he went from being the shy kid at the park to a kid with some of the heavier footage in the video.

Yeah man, Alex has impressed me over the year as well. He has been good for a long time but I didn’t expect him to be so down to huck in the streets. He is down to skate some gnarly stuff.

Yeah dude you can take Alex pretty much anywhere and he's got something! 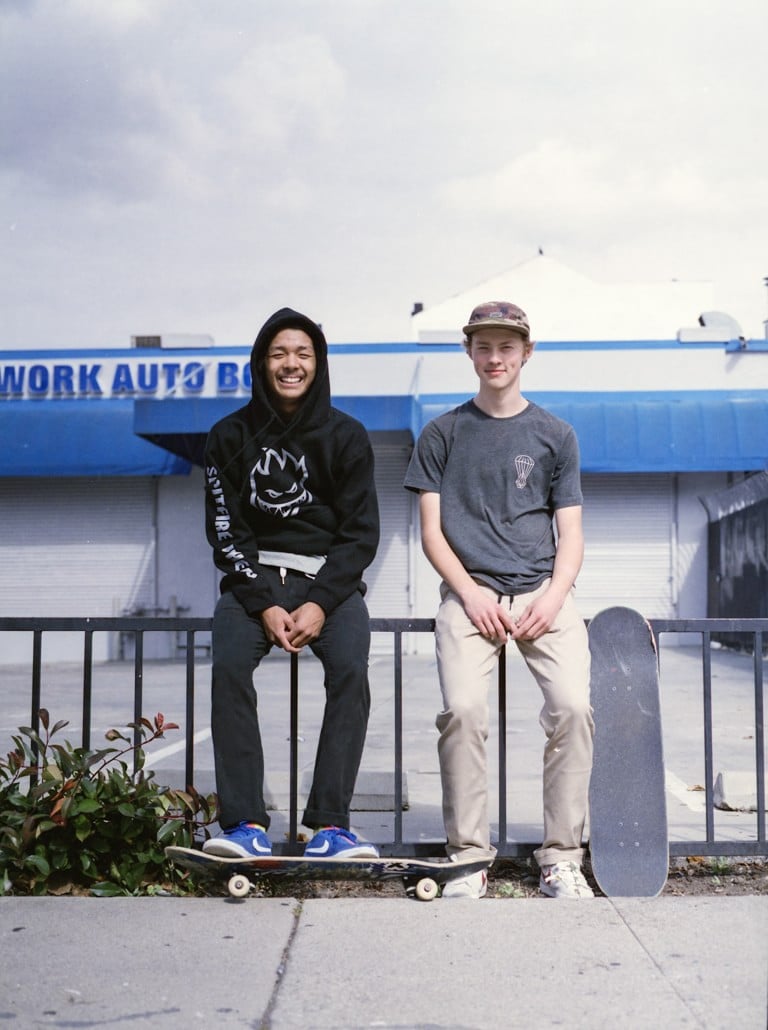 So you have made a few videos now, what advice to you have to someone that is trying to make their first full length video?

Dang, that's such a good question. I'd just say don't force it. Skateboarders party, they drink and they've got their own schedule. You can't force them to jump down shit if they don't want to. Let things come naturally and always be ready for whatever comes your way. Take a bunch of trips, and keep the hype going cuz skating should be fun whether there's a camera pointed at you or not.

Great advice, if you aren’t having a good time what are you doing? So December 11th right? Where is the premiere at and how can people get a ticket to the Goomba Slayers Video?

Yeah December 11th at the Hollywood Theatre here in Portland! To get in you just have to show up. I don't believe in putting on a premiere and making homies pay. I never have and never will do it for the money. Leaves everybody with more money to party with after. 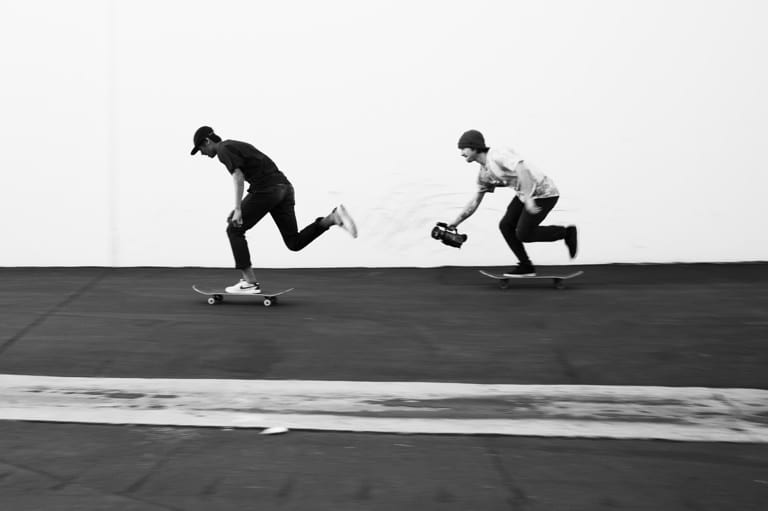 With that motto, I am sure the party will be pretty wild after this one. Will you be putting the whole video online at some point so all the out of town homies can see it?

If it isn't wild then were doing something wrong! Just got to lock down the after party spot. The whole video will be online....eventually. I'm working it out to make sure that everybody can get a little bit of love online through a mag. But if you want to see the whole video in its entirety, you're going to have to get your hands on a copy. There's a limited amount and after those are gone I'll probably work something out that you can watch it in full online.

Good deal. Well, thanks for taking the time to chat, any shout outs you want to give?

Anytime man! Yeah I'd like to shout out to you guys at tactics for giving us so much support, all the sponsors that helped us along the way and all the boys who skate and let me point my VX at em! It's all them, I just press a red button.